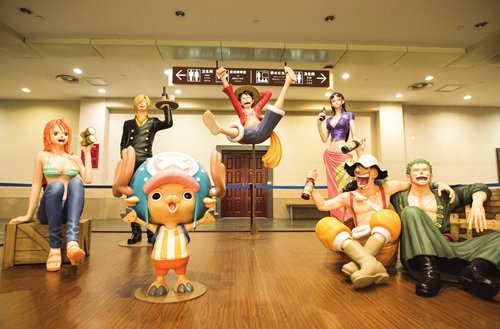 Several days before the 2019 Spring Festival, Hello, ONE PIECE! Luffy is Coming! left Shenzhen and arrived in at the Sichuan Museum in Chengdu, Sichuan Province. The special exhibition on world famous Japanese manga One Piece quickly became a hit on social media, especially among the large number of the manga's fans in China.

One Piece, written and illustrated by Eiichiro Oda, has been serialized in Weekly Shonen Jump magazine since 1997. The manga series follows the adventures of Monkey D. Luffy and his crew of pirates as they search for the ultimate treasure known as "One Piece." After more than two decades, One Piece has been translated into numerous different languages, allowing it to gain fans across the world. As of July 2018, more than 440 million copies of the manga had been sold around the world.

After the exhibition ends on May 10, it will head to four other cities throughout China throughout the rest of the year. The exhibition is being supervised by Oda directly, and includes his original hand drafts, restorations of classic manga scenes and other artworks based on the original story of the One Piece manga. Oda also drew a picture of a panda and Luffy especially for the nearly 3,000-square-meter exhibition's stop in Chengdu, which is home to one of the largest panda research bases in China.

While ticket prices are not cheap, the 120 yuan ($17.8) price tag hasn't deterred the numerous visitors from heading to the museum. Liu Qikai, an employee with the museum's department of promotion and marketing, told the Global Times, the museum has also established a special area to sell One Piece souvenirs that can only be found at the exhibition.

Many of these exclusive items have proven very popular. One expensive figure selling for 2,980 yuan has already sold out.

While some Chinese netizens have expressed surprise that the usually serious Sichuan Museum would host a manga exhibition, Liu noted that the museum's location and influence made it the perfect venue.

"The Sichuan Museum is the largest comprehensive museum in Southwest China. Compared to the previous stop in Shenzhen, the exhibition area and the number of items on display have been increased," Liu noted.

According to Liu, this is not just some commercial exhibition, but an important culture communication event. After complex discussions between the Chinese and Japanese organizers and several modifications to the exhibition plan, they were finally able to bring the exhibition to the Chinese mainland. A splash page from the One Piece manga

Japanese manga has long been an extremely popular medium in China, making it a great platform for cross cultural communication between the two countries.

With nearly 10,000 daily visitors, TalkOP is one of the largest discussion websites about One Piece in China. The operators of the website go to great lengths to promote the series.

One of these operators, the founder and director of the website, goes by the nickname Yingmu. A fan of the manga for 15 years now, his name was inspired by a character in One Piece. For the current exhibition, in addition to posting information of the website, Yingmu has helped organize many groups tours to Shenzhen and Chengdu.

Like the 19 other operators of the website, he devotes his spare time to the working on the website, posting information, translating related materials from Japanese into Chinese and organize fan meets - all free of charge.

"I first came across One Piece in 2004. I didn't like manga when I was young, but the hard work, friendship and dreams of Luffy and his friends inspired me lot and made me fall in love with One Piece," he told the Global Times.

"One Piece is not only for children to read, it also good for adults. Some people can find faith in themselves and even the strength to move on from the comic."

Since the middle of last century, Japanese manga has had a tremendous and far-reaching influence around the world. There have been several generations of outstanding world-class comic artists such as Osamu Tezuka, Akira Toriyama and Oda. Their work has profoundly influenced generations of young people from all over the world.

The series exhibition is not only a display of some of Oda's best and most influential works of the past 22 years, it also presents the ideas and techniques used to create a globally-known work that has influenced millions.

This influence has also reached Chengdu, where there are now 10,000 people working in the Chinese comic industry and more than 1,000 comic companies.