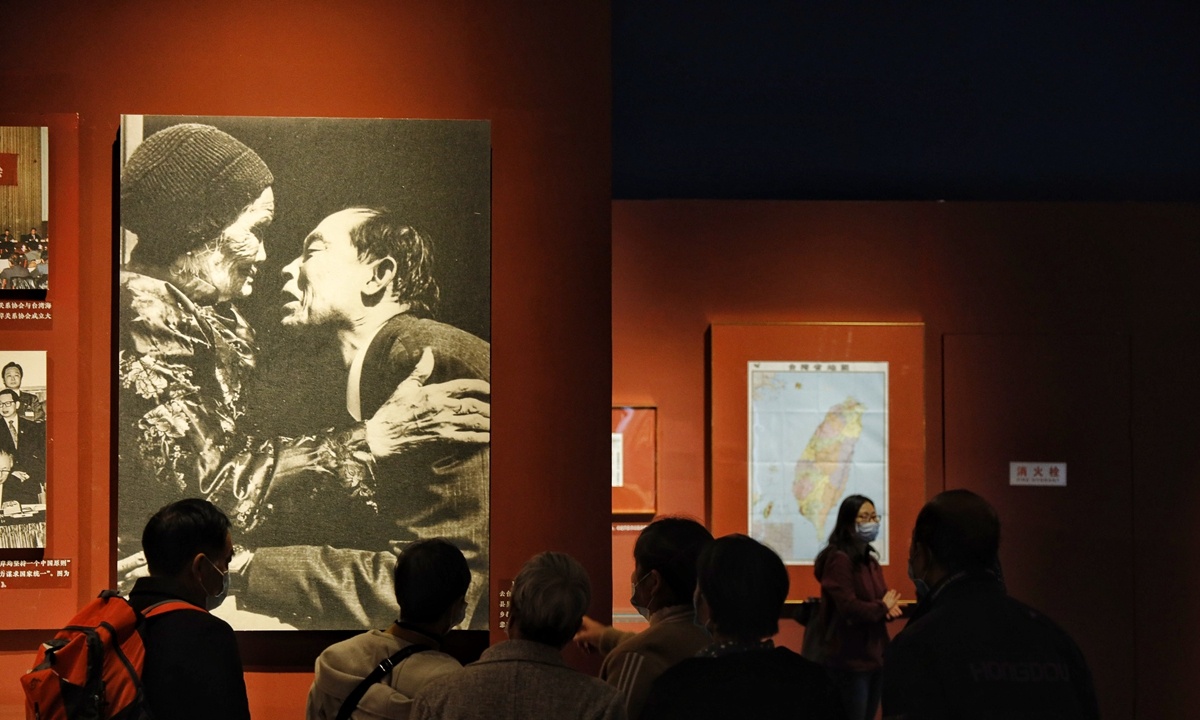 At an exhibition commemorating the 75th anniversary of the recovery of the island of Taiwan from Japanese colonial rule held at the National Museum of China, many visitors could be seen gathering around and staring at a black and white photo, some moved to tears by what they saw.

The photo shows a 106-year-old mother living in the Chinese mainland finally reuniting with her son, who had been living on the island of Taiwan for the past 40 years unable to return home due to war. The son is kneeling down in front of his mother as they both look at each other with eyes full of tears.

"How many people can live to be 106 years old? She is a lucky woman to be so long-lived and have the destiny of seeing her son," a 70-year-old woman surnamed Gao told the Global Times on Tuesday with tears in her eyes, adding that she could empathize with their situation.

Gao said her father and his eldest brother, a member of the Communist Party of China and a member of the Kuomintang respectively, had been separated from each other after her uncle went to the island of Taiwan and that they had never got the chance to reunite before their deaths.

Kicking off at the National Museum of China on Sunday, the exhibition is divided into six sections that show the complete history of the island of Taiwan from ancient to modern times by displaying representative historical items.

Wang Chunfa, curator of the museum, said that the exhibition is being held to review the heroic struggle of Taiwan compatriots against Japanese occupation and colonial rule in Taiwan and how people from both sides of the Taiwan Straits fought against foreign aggression and achieved a great victory.

According to the exhibition's introduction, more than 160 sets of cultural relics from the museum and more than 50 copies of important documents and archives from the Qing Dynasty (1644-1911) till today are on display, which strongly proves that the island of Taiwan is an inalienable part of Chinese territory.

"After watching the exhibition, I learned more details about the history of the island of Taiwan. One of the most impressive and touching items I saw was a jacket printed with the two words "missing home" that was worn by a Taiwan compatriot when he returned to the mainland to visit his family," 22-year-old postgraduate student Zhang Zhaoming told the Global Times.

An online version of the exhibition will be launched on the official website of the National Museum of China after the two-month exhibition comes to an end to allow more people from both sides of the Taiwan Straits, especially Taiwan compatriots, to be able to watch the exhibition.

"I hope more cultural exchanges and communication events between the Chinese mainland and the island of Taiwan can be held for young people so that we can learn more about each other. After all, we are one big family," a 20-year-old visitor surnamed Feng from Dalian, Northeast China's Liaoning Province, told the Global Times.