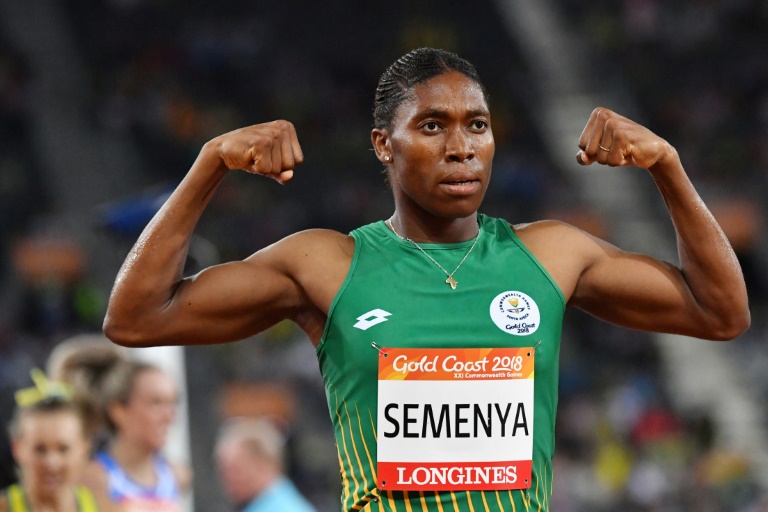 Barring Caster Semenya from competition because of testosterone levels would be 'arbitrary', said an editorial in the BMJ, a respected medical journal. (Photo: AFP)

Barring South African runner Caster Semenya from competition due to naturally high testosterone levels would be like excluding basketball players because they are too tall, experts commented Thursday, days before the top sports court is set to hand down a ruling.

Having unusually elevated levels of the hormone -- known to boost muscle strength and bone mass -- is not enough to make a world-class athlete like double Olympic champion Semenya, who has dominated the women's 800 metres over the last decade, they argued.

The record for that distance was set in 1983 by a Czech runner Jarmila Kratochvilova, who has long been dogged by accusations of doping.

"To become a great athlete requires at least 10,000 hours of training, focus, discipline, timing, coaching, equipment, and strategy," lead author Cara Tannenbaum, scientific director of the Institute of Gender and Health at the Canadian Institutes of Health Research, told AFP.

"If we exclude women who have high testosterone levels from track events, will we then decide to exclude men who are extraordinarily tall from playing basketball?" she asked rhetorically.

"It would be unscientific to make decisions on exclusion for men or women based on a single genetic factor alone."

The International Association of Athletics Federations (IAAF) is seeking to force so-called "hyperandrogenic" athletes or those with "differences of sexual development" (DSD) to seek treatment to lower their testosterone levels below a prescribed amount if they wish to continue competing as women.

The Court of Arbitration for Sport will rule by March 26 on capping testosterone levels in women athletes at five nanomoles per litre (nmol/L) of blood.

In non-athletes, testosterone concentrations typically ranges between 9 and 31 nmol/L for boys and men, and from 0.4 to 2 nmol/L in girls and women, Tannenbaum noted.

But at least one study of elite track and field athletes tested after competition showed a far smaller gap -- and even some overlap -- between women and men, she pointed out.

For this and other reasons, setting a limit of 5 nmol/L was "arbitrary" and discriminatory, she wrote in the BMJ, a medical journal.

But from 2011 to 2015, she took hormone suppressants to bring her below a 10 nmol/L limit imposed during those years, and would clearly need to do the same if the lower threshold were validated.

During that five-year period, her best times in the 800m were a second or two slower than before and after.

The athletics world championships in Doha start on September 28.

Responding to Tannenbaum's editorial, the IAAF insisted that the 5 nmol/L limit "is not 'arbitrary'".

"Rather, it is based on a comprehensive survey of all reliable reported data," athletics' governing body told AFP.

In 2017, the British Journal of Sports Medicine study -- commissioned by the IAAF -- showed that women with higher testosterone levels turned in marginally better performances in the hammer throw, the pole vault, the 400m hurdles, as well as the 400m and 800m events.

Other experts support the IAAF ruling, saying it is justified on biological grounds.

"A profound increase in testosterone levels [at puberty] mediates not only male genital development but also greater muscle strength and skeletal growth compared with the female which is long lasting into young adulthood," said Ieuan Hughes, a paediatric endocrinologist and emeritus professor at the University of Cambridge.

These are impacts "which sports physiologists recognise to be advantageous in highly competitive events," he said in written comment.

Hughes challenged the accuracy of the study cited by Tannenbaum showing a male-female overlap in testosterone levels among top-level athletes, chalking up the results to "outliers".

"Even the lowest testosterone value in men is four to five times great than the highest value in the female range," he said.

Chris Cooper, an emeritus professor of biochemistry in the School of Sport, Rehabilitation and Exercise Sciences at the University of Essex, suggested "the current evidence is a good as we are going to get that both natural and doped testosterone levels enhance female sports performance".

Cooper pointed out that a "special protected space for female sport" exists because there would otherwise be "no female winners" in most events.

Whether the IAAF rule is fair or "ethically right", however, is a separate question, he suggested.

No matter how the CAS decide, a subset of women athletes will no doubt decry the decision as unjust.