Experts give one in the eye to Bayeux Tapestry loan offer 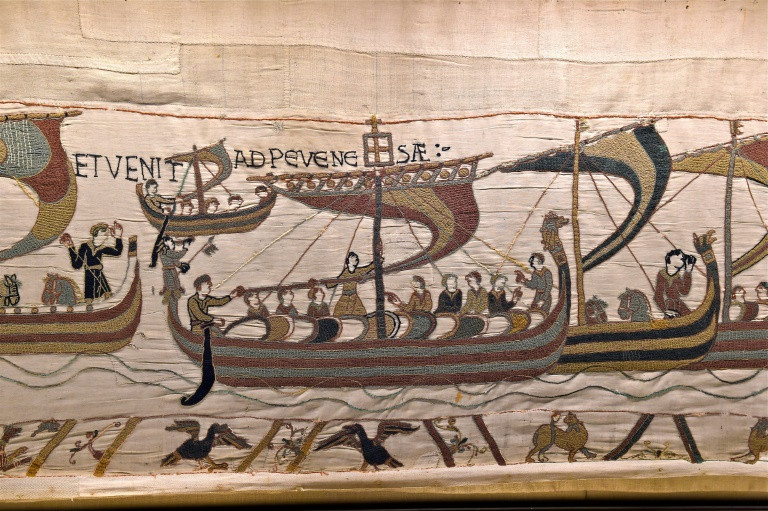 A handout photo from the Bayeux town hall shows the Bayeux Tapestry, which dates from around 1077 and depicts the Battle of Hastings. Photo: AFP

The Bayeux Tapestry will not be lent to Britain until major conservation problems are overcome, French experts said Thursday as they voiced their opposition to the historic treasure ever crossing the English Channel.

While French President Emmanuel Macron was basking in the afterglow of British praise for his diplomatic masterstroke made on the eve of an Anglo-French summit near London, reactions back home were less enthusiastic to say the least.

The former director of the museum in the Normandy town which houses the 68 metre-long (224 foot) embroidered account of the Norman conquest of England in 1066, hit out at the decision.

Isabelle Attard said moving such a "fragile, near-1,000-year-old roll of wool and linen" even a few metres was risky, never mind transporting it overseas.

"A temporary exhibition in Britain is worrying on several levels," she said, adding that she had "huge doubts" about whether such a loan was practically possible.

Prime Minister Theresa May announced Thursday that the tapestry would be exhibited in Britain in 2022.

But experts insisted that will only happen if a host of major technical and conservation issues are overcome first.

Curator Pierre Bouet, who cares for the tapestry at the museum, said he thought "it was a hoax" when he first heard of the plan.

"If you were to ask my advice, despite the regard I have for my English colleagues who I have worked with for many years, I would say no," he told AFP.

Bayeux mayor Patrick Gomont, while hailing the loan as a "great opportunity" for the town, said huge precautions would have to be taken to protect the artefact.

Bouet, who has written a book on the tapestry's many mysteries, said although it was in a good state for its age it "was still fragile, with between 400 and 500 spots where the material has had to be patched."

A recent report warned that holes, oxidation and the patches had put the tapestry "under stress" in places, while authorities have commissioned a new study on how to "stabilise" the roll and stop it degrading any further.

"Only when it has been stabilised can a decision be taken on lending it," the Bayeux mayor's office said in a statement.

If everything were to go to plan, the tapestry -- which shows how the English King Harold was killed by an arrow in the eye at the Battle of Hastings -- could possibly cross the Channel during the final phase of a refurbishment of the museum in late 2022 or 2023, it added.

The tapestry is presently protected from fire and dampness by a sealed glass case, and would have to be shown in Britain in the same way, "which would be extremely costly", Bouet said.

"I said no myself to the loan, although I really would like to say yes," he added.

Many angry Normans, however, do not want the tapestry leaving France. Mayor Gomont's Facebook page was bombarded with hostile reactions from locals.

Attard, who is also an ecologist politician, said the loan would be an economic blow to the town.

"Will there be compensation for the businesses who live off the 400,000 visitors a year the museum attracts," she asked on Twitter.

The origins of the epic account of William the Conqueror's claim on the English throne are shrouded in mystery, although many believe it was made in Kent near London in the years soon after the Norman conquest.

The first written reference to it is in 1476, and Napoleon brought it to Paris in 1804 to try to stir up public opinion in favour of his own ultimately unrealised plans to invade Britain.

Adolf Hitler had it moved to the Louvre museum in Paris in June 1944 after the Allied landings on the beaches nearby Bayeux, but it was never taken to Berlin as he had ordered.