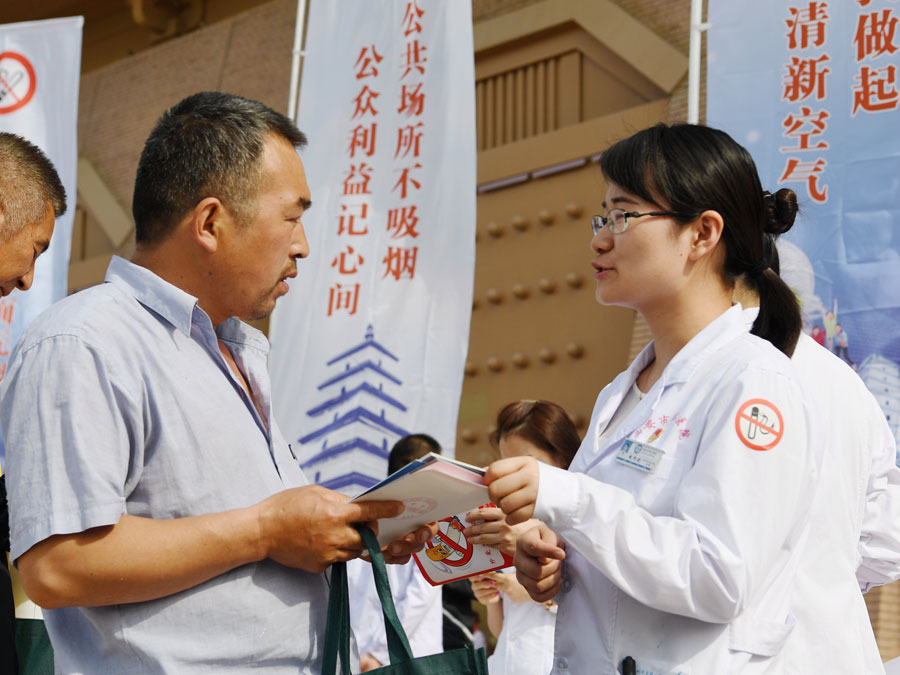 Regional smoking bans have shielded only about 10 percent of the Chinese population from the harmful effects of tobacco in public venues, health experts said on Thursday.

The low percentage has pitted China against a tough and urgent battle to stub out cigarettes in public spaces as the country aims to raise the rate of people protected by anti-smoking rules to 30 percent by 2022 and 80 percent by 2030, according to a health promotion plan released in July by the State Council, China's Cabinet.

"In China, it took more than a decade to implement smoking bans in about 20 cities. The slow pace is worrisome, and health authorities should hasten efforts to curb tobacco use," said Xiao Lin, a researcher at the Tobacco Control Office at the Chinese Center for Disease Control and Prevention.

At present, 23 cities across China have rolled out regulations to restrict smoking in public spaces, including office buildings and public transport.

The latest entries include Wuhan in Hubei province as well as Qinhuangdao and Zhangjiakou in Hebei province, which have passed local smoke-free rules in the past month.

"To achieve the goal, it is crucial that all capitals of provincial-level regions and other large cities with a population of more than 2 million begin implementing smoking bans in the next three years," said Cui Xiaobo, vice-president of the Beijing Tobacco Control Association.

There are over 100 cities in China with such large and dense populations that maintaining healthy air quality is particularly difficult, Cui said.

"Implementing comprehensive smoking bans in these large cities is the first step to push for a wider coverage of tobacco control nationwide," he said.

According to the national health plan, China is also striving to reduce the percentage of smokers who are 15 years or older to 24.5 percent by 2022 and to 20 percent by 2030.

There are more than 300 million smokers in China, and about 1 million deaths are tied to tobacco use each year, according to the National Health Commission.

"It is also necessary to deliver more services to help heavy smokers quit, as a large number of cities have not launched such services yet," according to Xu Guihua, a consultant to the Chinese Association on Tobacco Control.

"Compared to the complicated process of setting up regulations, it's a much more feasible approach to provide withdrawal programs for smokers as part of efforts to protect the public from smoke fumes," she said.