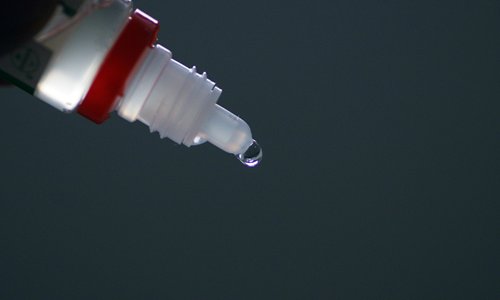 File photo of a bottle of eye drop. (Photo: VCG)

Six types of Japanese eye drops that are popular in China have been blacklisted in Canada after health authorities there analyzed the ingredients. Experts warned that their long term use might cause damage to the eyes.

The products contain prescription ingredients and have not been approved by Health Canada, according to its official website in the recalls and safety alerts section on April 15. The eye drops, an eyewash and an acne gel sold in British Columbia are unauthorized and may pose serious health risks, according to Health Canada, which also removed the products from sale at retail locations in British Columbia.

Four out of the six products are produced by Santen Pharmaceutical Co, a Japanese pharmaceutical company. All four are on the lists of essential shopping for Chinese tourists visiting Japan. Vendors in China have yet to be impacted by the Canadian decision. On Taobao, JD.com and other Chinese e-commerce platforms, Japanese eye drops are still available.

The Sante series of eye drops uses a complex series of ingredients, one of which is adrenaline, which is able to remove bloodshot in eyes but has only a temporary effect, Jie Ying, a corneal and ocular surface disease specialist at the leading ophthalmology hospital, Beijing Tongren Hospital, told the Global Times.

"When used again, the symptoms seem better, but the eyes are actually getting worse," he said.

Another ingredient, neostigmine methyl sulfate, shrinks the pupils and brings a bright feeling to the eyes, Jie noted, "but all of the above are toxic and cause ocular surface destruction."

There have been complaints about the Japanese mint eye drops for years. Mentholated FX-Neo drop causes burns, according to technology website gizmodo.com in January 2012. Some patients have used the four controversial eye drops and ended up with glaucoma, news site zjol.com reported on August 29.