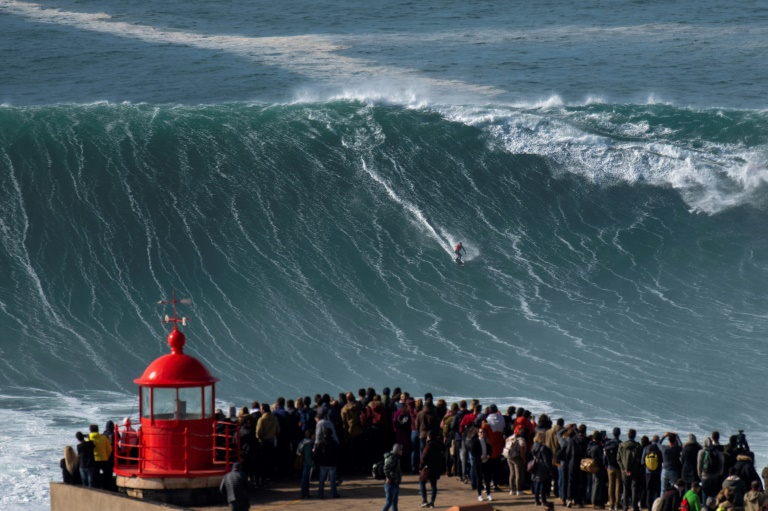 Waves in Nazare, on Portugal's Atlantic coast, can reach up to 30 metres during the winter. (Photo: AFP)

Big wave surfers have been flocking to a formerly sleepy Portuguese fishing town, chasing monster waves that are some of the highest ever surfed.

Earlier this month the news broke that a set of fearsome 20-metre (65-feet) waves were coming to the small town of Nazare on Portugal's Atlantic coast.

The message spread like wildfire and soon extreme surfers and sports fans -- as well as keen photographers -- arrived at the town's Praia de Norte beach.

They gathered on the roof of a red lighthouse, listening to the deafening roar and watching in awe as the waves smashed against the cliffs. From the viewing point you cannot see where the waves end, giving the illusion the colossal walls of water could engulf their audience.

But the masses just missed out on seeing French surfer Justine Dupont have the ride of her life on November 13.

It could be a new surfing world record set by a woman.

"I began riding the wave, I felt I was going faster than usual, and that it was steeper," the 28-year-old surfer tells AFP.

"I had the feeling it was never ending... I could fly away!"

The massive wave has not been measured yet, but is expected to be at least 20 metres high.

It will have to exceed the 2018 mark of 20.72 metres set by Brazilian surfer Maya Gabeira, also in Nazare, to become a record.

The verdict, judged by the governing body the World Surf League, will not be given until spring next year.

She said the seaside town with a population of 15,000 has become a surf haven over the last few years.

"It's mad!" she said. "Two years ago we went to see the sea by the lighthouse, there were no cars parked -- now, you can't drive.

The monster waves have always crashed at the town's beach, but surfers had previously ignored Portugal and gravitated towards beaches in California and Hawaii.

Nazare was put on the surfing map in 2010 when the town's mayor launched an initiative to attract surfers during the winter.

"We were looking for someone who could develop big wave surfing" said Pedro Pisco, a local sports minister.

He asked for help from Garrett McNamara, who until last year held the world record for the highest wave ever surfed.

"No surfer considered Portugal a great surfing destination, but I was looking for a 100-foot (30-metre) wave," Hawaiian surfer said.

A Nazare bodyboarder invited McNamara to the town, wanting to find someone who could take on the spectacular waves.

Today, at the age of 52, the surfer is considered a "god", said Anne-Marie Sana-Boisson, who owns a market stall in Nazare.

She said the town has changed rapidly over the last four years -- and not necessarily for the better.

"At first there was a few people but now it's crowded."

She said many buildings are being constructed and sold, making it "hard to find houses".

But she admitted the town has become "more dynamic". And, she adds, not everything is closed over winter as it was before.