Facing deportation, rapper 21 Savage vows fight to stay in US 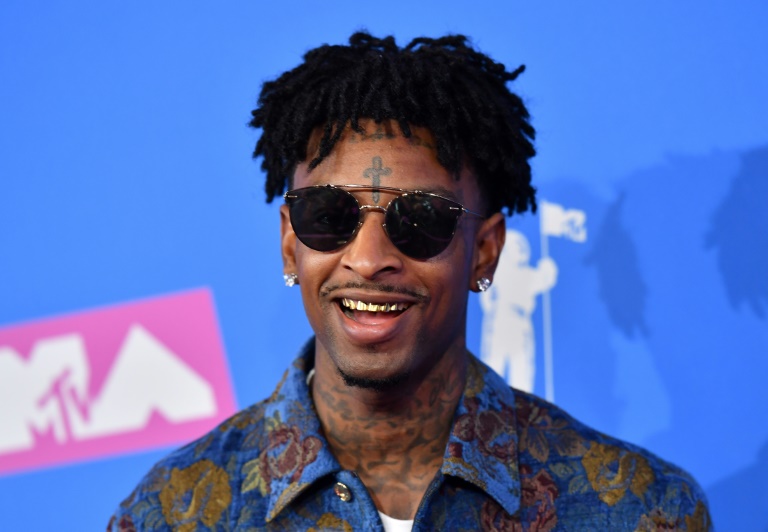 Rapper 21 Savage, who has long said he is from the US state of Georgia, was detained by US immigration officers who say he is actually British and overstayed his visa. (Photo: AFP)

21 Savage's lawyer confirmed Monday that the Grammy-nominated rapper had overstayed his visa as a child, but vowed he would fight for his right to remain in the United States after his arrest by immigration agents.

The 26-year old chart-topper -- real name Sha Yaa Bin Abraham-Joseph -- was detained in the southern city of Atlanta Sunday by the US Immigration and Customs Enforcement agency (ICE), which says he is a British citize

"As a minor, his family overstayed their work visas, and he, like almost two million other children, was left without legal status through no fault of his own," the rapper's attorney Charles Kuck said in a statement.

"The continued detention of Mr. Abraham-Joseph serves no other purpose than to unnecessarily punish him and try to intimidate him into giving up his right to fight to remain in the United States."

Kuck said his client has a pending application for a U visa, which is for victims of crimes who have faced mental or physical abuse in the United States.

"Mr Abraham-Joseph has never hid his immigration status from the US government," Kuck said.

"The Department of Homeland Security has known his address and his history since his filing for the U Visa in 2017, yet they took no action against him until this past weekend."

21 Savage has long said he is a local act from Atlanta, the state capital of Georgia, which is considered the home of hip hop innovation.

According to Bryan Cox, a spokesman for the US Immigration and Customs Enforcement agency (ICE), he came to the US legally as a minor in 2005 but "became unlawfully present in the US" when his visa expired a year later.

Cox said the artist was convicted of felony drug charges in October 2014.

"Mr. Abraham-Joseph is presently in ICE custody in Georgia and has been placed into removal proceedings before the federal immigration courts," the statement said.

Kuck said his client should be released on bond, saying he "is not a flight risk, as he is widely recognizable, and a prominent member of the music industry."

The lawyer also said 21 Savage supports his three children, who are US citizens, which makes him eligible for deportation relief.

The musician's arrest sent shockwaves through social media, with a number of top artists and industry insiders backing the young rapper.

"THEY ALWAYS TRY SOME WAY TO BRING US DOWN."

"Free 21," tweeted hip hop artist Meek Mill, who was released from prison last year after his unexpectedly heavy sentence for a parole violation sparked protests over racial bias in US probation laws.

Rappers Lil Yachty and Vince Staples echoed that call, along with Alex Tumay, a mix engineer who regularly works with Atlanta artists.

"Abolish ICE," Tumay tweeted. "ICE arresting celebrities to divert attention from the fact they just admitted they can't reconnect kids with their parents."

The agency has come under fire for its aggressive enforcement of the "zero tolerance" immigration policies of President Donald Trump, including guidelines implemented last summer that led to Latin American children being separated from their parents at the US-Mexico border.

His lyrics touch on everything from drugs and violence to systemic racism and police brutality.

His second album, "I Am > I Was" debuted at the top of the Billboard 200 in December 2018, holding the number one spot for two weeks.

The rapper is up Sunday for two Grammys for his work on fellow rapper Post Malone's smash hit "Rockstar," including for the major Record of the Year award.

Throughout his rise to fame he has toured the United States but does not appear to have performed abroad.

In public interviews he has not explicitly called himself American, but regularly references his upbringing in Atlanta.

Many of the artist's supporters were quick to note his contributions to the community.

"Mr Abraham-Joseph is a role model to the young people in this country, especially in Atlanta," another of his lawyers, Dina LaPolt said, adding that he is "actively working in the community, leading programs to help underprivileged youths in financial literacy."

Since the news of 21 Savage's arrest broke British reports have indicated he originally is from Newham in east London, a detail neither ICE nor his entourage have commented on.

In 2016 the rapper -- who speaks with a thick southern American accent -- gave an interview to urban news YouTube channel VladTV, listing a number of Atlanta neighborhoods he has called home.

"I done grew up in all Atlanta really, everybody know me," he said. "If you don't, you ain't from this city."