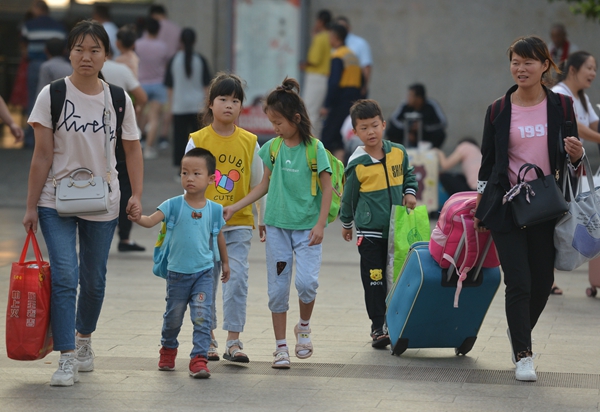 As a new semester starts, children of migrant workers return home in Fuyang, Anhui province, after they spent holiday time with their parents in their workplaces. [Photo provided to China Daily]

With the new semester starting this month, Wang Jingjing, 6, and her elder sister Wang Lian, 14, have resumed their studies back home in school in Jiujiang, Jiangxi province, but memories of their rare time spent with their working parents in a noisy clothing factory in Shishi, Fujian province, about 750 kilometers from their hometown, still warm their hearts.

The sisters are part of a group called "little migratory birds"-children left behind in their countryside homes who "fly" hundreds of miles to enjoy a precious short family reunion in their parents' workplaces in cities.

The two sisters' happy moments there include the two playing a game to get the right to run errands for their parents, such as fetching stacks of lining fabrics and galloping upstairs to the parents who labor over piles of half-made jackets.

The daily routine goes like this. Without chances to go sightseeing, they are confined to the factory among dozens of similar-looking buildings. Workers flock to the factory at 8 am. Later, the empty-bellied kids drag themselves out of bed, walking to join their parents. At lunch breaks, workers cook for their families on dozens of induction cooktops lined up in the canteen. The parents often work late into the night, sometimes beyond midnight when there are many orders, and their kids accompany them.

Despite the long hours waiting, the children find ways to make themselves happy, such as playing hide-and-seek indoors. And they often help their parents with menial tasks such as handing over clothes, ironing ready ones and changing bobbins.

Wu Yushan, a factory owner, says: "It is not safe for the kids to roam the streets. Although it is not good for the company's image having kids all over the place, I can live with it, because safety is our highest priority."

As the factories are shut on Sundays, most workers take their kids to parks or malls. And sometimes the children can join programs organized by the local government in which college students volunteer to take the kids on museum tours.

A total of 18 children lived in Wu's factory with their parents this summer. Eight came from remote hometowns, while the other 10 were those who live with their migrant parents in the city.

Congcong, 4, spends most of his life there where his parents work, and his home is a 6-square-meter room comprising a bunk bed and a small table. When he was 3, his parents decided to send him to a nearby kindergarten with cost of 4,500 yuan ($632) each semester. The average monthly salary for workers there is about 7,000 yuan.

Congcong's father, Huang Hailong, has been working in the factory since 2007, where he met his wife. They first left their son in Huang's hometown in Suining, Sichuan province, but later they came to realize they had issues with the parent-child relationship.

"For a while, he didn't want to speak to me, because we didn't see each other very often," says Huang. "That is why we chose to bring him over to live together with us."

There are currently 6.97 million "left-behind" children in China, while over 14 million children live with their parents who moved away from home for higher salaries in more prosperous regions.

To provide better on-site childcare, many young workers like Huang now choose to live with their children while moving across the country. For younger parents, their children's education carries the most weight. They want their kids to go to college and work in an office rather than sweating like them.

The factory experience has made these children more self-reliant and capable than their peers. The older ones, like Ou Qiuquan, 19, have turned the place into a "library", reading books amid the humming sewing machines and electric fans above their heads.

Considered a role model, he has spent almost every summer with his parents in the factory, where they have been working since 2005, and was joined later by his sister and brother. He and his family have had many lengthy discussions about his future, and to their joy, he got into Fujian Medical University after the college entrance exam this year.

His younger sister, Ou Tingfang, 14, is proud of her brother. "I need to work harder than ever before," she says, with a book entitled Red Star Over China by Edgar Snow in hand. "I don't want to let my family down."