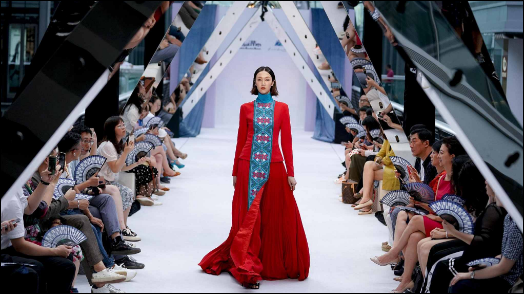 Shenshan Fair, a unique market representative of traditional Chinese handicraft culture, has opened in Beijing and will run until September 22.

It was launched by EVE·China Craftsmanship at Parkview Green Mall in Beijing on August 1 with the main visual elements of blue dye cloth and pleated skirt of the Miao ethnic group.

Urban consumers can experience the atmosphere of "going to a fair," an activity that involves selling and buying goods on certain days in remote mountain areas.

The Chinese traditional handicraft on display will take them through thousands of years of traditional culture.

According to the EVE Group, EVE·China Craftsmanship shuttled between the city and the mountains for the past 15 years looking door to door for women engaged in embroidery and establishing family studios for them. The team visited more than 8,000 women, sorted out over 5,000 Chinese traditional embroidered patterns, and opened the complete online database system to global fashion designers.

Thanks to the team's efforts, more and more women now receive orders that help them financially.

"During the summer vacation, I hope that more urban people can experience the aesthetic power of traditional Chinese culture. People's understanding and recognition are the beginning of a decent life for the craftsmen," said Xia Hua, the founder of EVE·China Craftsmanship.

The Shenshan Fair takes the form of traditional crafts and culture with different themes from Tibet, Inner Mongolia, Sichuan and other regions.