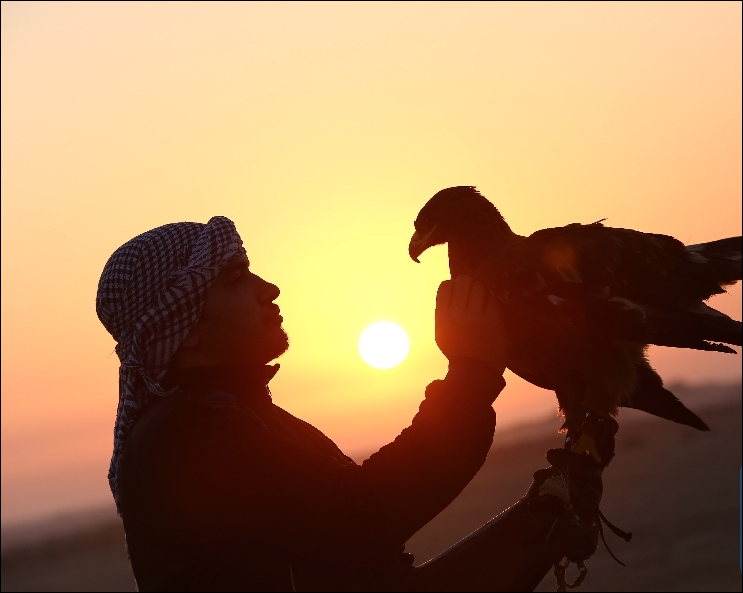 In the heart of the golden desert of Egypt's Alexandria, dozens of enthusiastic falconers and their raptors marked the sixth edition of World Falconry Day (WFD).

As the sun started to rise in Alexandria's Borg El Arab, north of Cairo, Hani Ibrahim, an Egyptian falconer, carefully watched his falcon soaring through the skies and swooping down speedily to catch a little pigeon the man has released.

"The relationship between my falcon and I is unique ... I spent long time to train him and we are kind of close friends now," Ibrahim said after his bird landed on his gloved fist.

Ibrahim said the event, which is marked annually on Nov. 16 worldwide, is meant to spread awareness about birds of prey through carrying out a number of activities such as demonstrations, discussions and exciting practical workshops on the art and practice of falconry.

"We have been holding this event for three years now and every year more people join us to know more about these majestic birds," Ibrahim told Xinhua.

Ibrahim, who has been a falconer for more than 30 years, said that Egyptian peers and falconry clubs adopt the principles of the International Association for Falconry (IAF) which are dedicated to the preservation of the ancient art of falconry.

"As the IAF stipulates, preserving falconry involves maintaining not only the traditional culture that builds practical skills of empathy with animals, but also the conservation of raptors and their prey," Ibrahim told Xinhua as visitors over sand dunes watched falcons and hawks hovering overhead.

Sayed al-Sayed, one of the organizers and admin of "Egyptian Sniper" falconry group on Facebook, said the event is co-organized by four falconry clubs in Egypt.

"This activity is held under the patronage of the IAF as Egypt is a member of the international organization," al-Sayed told Xinhua.

Al-Sayed, who is also a famous Egyptian falconer, said falconers show ancient and modern training techniques during the two-day event with demonstrations of falcons flying in the heart of the desert.

"For two days, falconers have been showing their skills and the skills of the birds in hunting, speed as well as the beauty of the raptors," al-Sayed said.

He added that such events are also important for falconers who meet here as they exchange experiences that can help them in the future.

"In addition, these events also help ordinary people get knowledge about this art that is an authentic part of our culture," al-Sayed revealed, adding that one of the main goals of falconers in Egypt is helping and rehabilitating migrant birds and release them during migration seasons so they can fly back to their habitats.

Hamada Ismail, a college student from Cairo, travelled to Alexandria with his friends to get close knowledge about falconry in Egypt, which is the cradle of this art.

"I have learned about the event from a Facebook announcement and I really wanted to know what the art of falconry is," Ismail told Xinhua, sipping hot Arabian coffee offered to guests by the organizers.

Ismail expressed high admiration of this kind of sport, hoping that it would become more popular in Egypt.

"I loved falconry ... I think I'm going to raise a hawk soon," Ismail said with a smile.