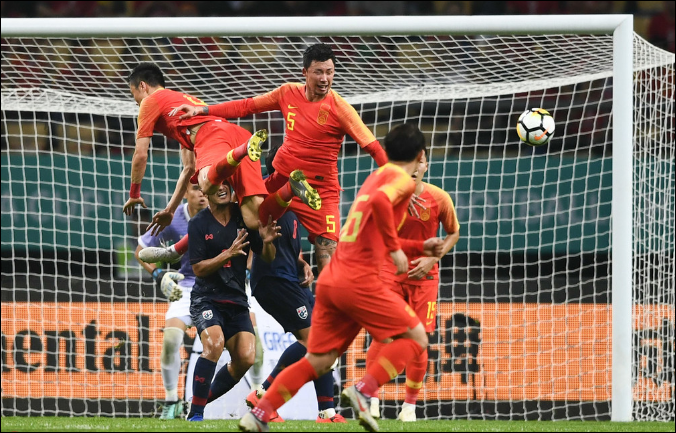 Fabio Cannavaro's first game as coach of China ended in a 1-0 loss to Thailand in the opening match of China Cup, March 21, 2019. (Photo: IC)

Winning the opening match of the China Cup proved to be a mission impossible for the host national team, which fell 1-0 to Thailand on Thursday night in Nanning, Guangxi Zhuang autonomous region.

While spectators at the sold-out 60,000-seat Guangxi Sports Center loudly vented their anger as the home squad left the pitch, within minutes hundreds of millions of netizens expressed their disappointment online, making the loss one of the hottest topics trending on Chinese social media.

By Friday morning, related topics had been viewed more than 100 million times on Weibo, generating waves of criticism from fans and media.

"Team China was suppressed by the Thailand squad throughout the whole match," said Han Qiaosheng, a well-known sports commentator and TV anchor.

"If Thailand had not missed several good opportunities, the Chinese squad would be in an even more embarrassing position.

"Chinese soccer is no longer among the best in Asia ... for a long time now, we have been in the second tier. Although we call our league the Chinese Super League, the word 'super' only exists in the name."

"The current Thailand national team players are all in their prime, and they will be strong opponents for Team China for the next few years," said Li.

"Now the old generation of Chinese players is retiring, but the young guns still cannot shoulder the responsibility. The qualifying games for the next World Cup are coming. We must try harder!"

Fans have now seen the home side lose its opening game of the China Cup in three consecutive years－2-0 to Iceland at the inaugural edition in 2017, and 6-0 to Wales last year.

Thursday's defeat－the first test of newly appointed coach Fabio Cannavaro who is also helming CSL side Guangzhou Evergrande－was harder to swallow because Team China had defeated Thailand in the round of 16 at the Asian Cup in the United Arab Emirates in January.

The 45-year-old Cannavaro, who took over from compatriot Marcello Lippi last week, has made headlines and triggered controversy because of the dual club-and-country role.

"China now has the financial power to bring the best coach to manage its team, but that cannot bring any improvement overnight," Cannavaro said after the loss.

"You need to set up a sustainable system in order to develop soccer over the long term.

"China cannot improve with only good tactics. I found that problem during this year's Asian Cup. And what I saw tonight confirmed my judgment."

Before the start of the China Cup, Cannavaro said that fans and media need to focus on long term development of Chinese soccer instead of what happens at the tournament.

"It's like building a house－the first job is to build a solid foundation," he said

"Based on that, we can have success. Compared to Japan and South Korea, their plans started decades ago.

"They are 20 to 25 years ahead of China in terms of their soccer development."

Another factor was that Cannavaro did not recall China's best striker, Wu Lei, who is now playing for Espanyol in La Liga.

Other experienced veterans, such as captain Zheng Zhi, were passed over in order to make way for younger players.

Cannavaro said he sought out the opinion of Lippi, who now serves as an adviser, including player selection.

"The China Cup players are all those who had good performances in the previous rounds of the CSL, along with young players," said Cannavaro.

"What we need is a sustainable system that will allow the best coaches all around the world to work here in the future. It's not a short-term play. It will take time."

Team China's next match is set for Monday.