Clouds of dust swirl in the air as innumerable wildebeests throw themselves into the Mara River as they try to cross its surging waters without falling prey to crocodiles lurking under its surface. This is just one scene from the vast herds of the grazing antelopes' annual migration from the Serengeti National Park in Tanzania to the greener pastures of the Maasai Mara National Reserve in Kenya. 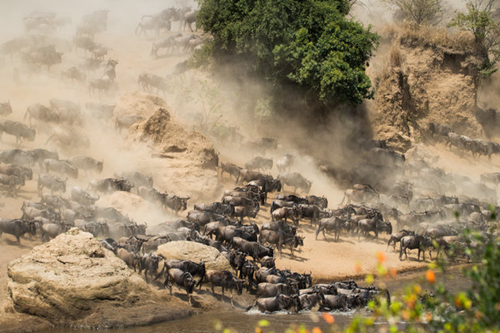 Wildebeests undertake their annual migration from the Serengeti National Park in Tanzania to greener pastures in Kenya. (Photo: China Daily)

"It's spectacular! My excitement is beyond words. It feels different to be here in person rather than to watch it in a documentary," says Beijinger Hou Yunsong, 14, who traveled to Kenya with his mother, Hou Jing, in August.Their trip was combined with a natural-science-education program, which saw Chinese zookeeper Yang Yi on hand to introduce animals' habits and characteristics on safari.Beijing-based company Nature Culture began organizing these trips three years ago to give parents and kids the chance to visit destinations rich in biodiversity, such as Sri Lanka and Malaysia, to observe wildlife. Experts like Yang, who often promote natural-science education, act as guides."It's a good opportunity for parents and children to study together and develop their relationship. Many parents also enjoy nature, and these experiences help to recall their own fond childhood memories," says wildlife photographer Zheng Yang, co-founder of the company."They will also be moved by the interaction between the animals, such as the bonds between mothers and offspring, and prompted to think about their own family relations."Zheng believes that his company provides a unique travel experience and that it's more effective to teach kids on-site knowledge about animals, because it makes it more likely children will remember what they learn.While most children tend to be interested in primates, amphibians and large animals such as lions, leopards and hippopotamuses, only a few prefer wild birds, Yang says. Before a trip, the company will provide training programs about safety, local customs and traditions, and local biodiversity. After every trip, the experts will help children share their feelings in a presentation to an audience made up of parents."It's a selective lifestyle program, not a mainstream one. Only those who really enjoy it will persist. We have many regular customers," Zheng says."Unlike typical travel products, our trips are not uniform and our guides are experts in their fields, such as zoology. You never know what animal you may encounter until it happens, so each experience is different."Their peak time is summer and winter vacations, and the children taking part are 6 to 12 years old. The company also organizes short trips to museums in China and provides children with courses taught by experts about nature and wildlife.Other companies have begun to set up travel packages around the theme of natural science, having noticed the family-travel market's potential. But there is still little in the way of regulation in this emerging sector."The more I learn about nature, the more I like it," Yunsong says."When I'm in the wilderness, I feel like I'm part of the Earth. It's good to know that there will always be this natural paradise that can comfort your heart.

"A date with nature

Yunsong started to learn photography from Zheng two years ago with a digital single-lens reflex camera."I enjoy the process of taking photos. I like to hear the sound of shutter clicks. I'm blissfully happy when I capture a good picture," says Yunsong. "Whenever I see a photo, I will recall the moment when I took it."I like taking pictures of wild animals because I like the uncertainty. You never know what will happen the next second."Zheng says each time they observe a wild animal, the only sounds they hear is the click of shutters. He teaches the parents and children how to take the best photos possible, and he believes photography is a great vehicle for communication.For the experts, these trips offer the opportunity to learn about nature education in other countries, and they often return home with illustrated handbooks of the wildlife they have encountered abroad. They enjoy guiding tourists because they want to pass on their knowledge, and they also relish the chance to encounter animals in the wild.

They become excited when they come across rare species. When they caught sight of a critically endangered helmeted hornbill in Malaysia, one of the locals said that it was only the third time he had seen the bird over the past 15 years."People used to kill the bird for its casque, which is a precious ornamental material. Someone may think it's just a bird, but you will be touched when you know the story behind it," Zheng says."This kind of connection between human beings and animals is not uncommon during our travels."Yang once raised a baby chimpanzee for three years before it was sent on to another zoo in 2003. It so happened that when he guided a group of tourists around Shanghai Zoo last year, the chimpanzee recognized him through glass－and greeted him by moving back and forth."If an animal was once raised by me and then sent away, I rarely see them again to avoid recalling old memories," Yang says."I was very happy and surprised that he still remembered me. When I left, he still followed me with his eyes."

Fundamental changes"These trips are like opening a door for us to a colorful world. My son and I have learned how to observe the environment surrounding us," says Hou Jing, 43, a university lecturer."When you learn about the habits and characteristics of an animal, you realize that human beings are not superior at all."More importantly, she believes that the children on these trips learn a lot about benevolence and love. They don't hurt animals or plants and will also stop others from doing so, such as people who try to pick flowers in botanical gardens.Zhang Ying, 40, gradually fell in love with nature and wildlife after joining several of these trips with her 9-year-old son, Fang Jinpeng."My generation didn't have much chance to learn about nature in a scientific way. I didn't even know what I wanted to do when I was a high school student, but my son already knows what he likes, even at such a young age," Zhang says.She's glad that they will both be able to develop scientific knowledge about nature and have more to talk about.The company worked with the Fragrant Hills Park in Beijing to organize camping activities and guide parents and kids to observe amphibians and insects at night. That's how her son started to learn about wildlife.A teacher would return an insect back to exactly the same spot on a leaf after presenting it to the parents and children.

"Teachers are passionate about their profession and children like them," Zhang says."My son admires scientists after learning about their work. Each time he goes to the Beijing Museum of Natural History, he will bow to photos of the curator and former curator."Through his own efforts, Jinpeng successfully passed the test to allow him to work in his free time as a guide at both the National Museum of China and the Beijing Museum of Natural History.The boy believes he has a responsibility to tell others about the importance of animal and plant protection. He stops other children who want to see animal performances or feed animals in a zoo and tells them it harms the creatures."The most important thing is to protect the habitats of wildlife," Jinpeng says. "If you don't know about the creatures, you can hardly know how to protect them."Jinpeng often reads books and watches documentaries to further his knowledge about wildlife."A tiger will not hunt 10 rabbits, eat only one and waste the rest," Jinpeng says. "As human beings, we should not waste food."

Safety mattersZheng often says on the trips: "Safety always comes first in the wilderness." Nature reserve staff members protect groups and help them find their way.Travelers have to fasten their safety belts in the safari vehicles and are never allowed to put their bodies or arms out of the windows. If an elephant is crossing the road, they are instructed to keep quiet."Also, you should never make contact with mammals, especially primates, in the wilderness so as to prevent the risk of the transmission of zoonoses," he says.He emphasizes that visitors should never take living creatures, plant seeds or illegal wildlife products back to China.Liu Simin, vice-president of tourism at the Beijing-based Chinese Society for Future Studies, says: "This kind of travel can not only broaden children's horizons, but also teach them about natural science. However, it takes time for the market to grow."That said, discovering beautiful natural scenery remains the priority for ordinary tourists, and anyone can enjoy these kinds of experiences with their families. In natural-science travel, parents have to focus their energies on studying the subject in detail, but some parents may not be willing to do so."Liu says that tailored family-travel packages emphasize the need for interaction, and are likely to continue to grow in popularity.