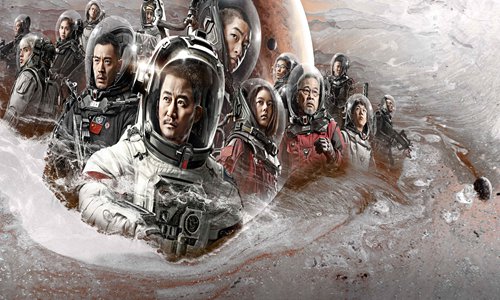 The poster of the movie The Wandering Earth (Photo: VCG)

Four comic books based on stories by iconic Chinese sci-fi writer Liu Cixin were officially published on Monday as the first batch of a plan to use 15 of Liu's works, and the writer's fans are excited about the result.

Liu, a Hugo Award-winning writer, has written many well-known books including "The Wandering Earth," which was made into a successful film that grossed 4.68 billion yuan ($660 million).

This time, four of his stories including "The Wandering Earth" and "The Rural Teacher" have their comic versions.

Liu wrote a letter to his fans about these comic books, saying that the books can present what his fiction aims to convey to readers and can show an imaginary world created by brilliant domestic and foreign cartoonists, according to a report by yit.com.

The recomposing plan is a project authorized by Liu, with cooperation from Chinese and international teams. It has gathered more than 20 comic artists from all over the world, including leading figures in the Chinese comic industry and international masters involved in the creation of characters such as Batman and the X-men.

The report said these teams plan to take four years to complete recomposing 15 of Liu's stories.

"It is easier for readers to understand science fiction when the word-versions are recomposed in picture-versions," Shi Wenxue, a cultural critic based in Beijing, told the Global Times on Tuesday. "Especially for Liu's works. His fiction has a large number of industrial scenes and proper nouns and requires readers to have a considerable imagination."

Shi said these comic books can lower the threshold of reading and increase its interest.

Liu's fans also agreed with the analyst. "I cannot wait to read these comic books and see if my imagination of the world Liu described is right," one Chinese fan surnamed Wan told the Global Times.

"I hope you will take us by the hand to fly through space, to see the future and the past in time, to look up at the stars, to listen to the deepest thoughts in the universe," one Sina Weibo user said.

Shi gave high praise to Liu's fiction. "Liu is good at portraying characters who can travel through space and time. They cannot control their destinies but still bravely dedicate themselves to the destiny of all human beings, which is a kind of Chinese classic humanistic spirit."