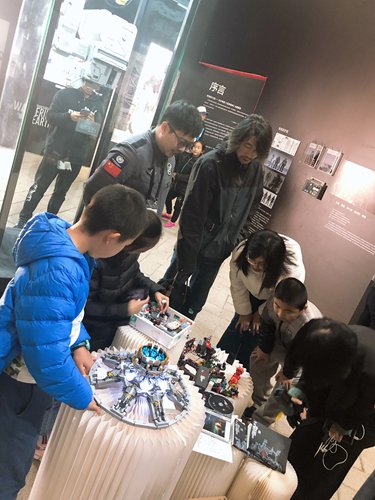 It is time for 19-year-old Chen Xiaomeng to choose which queue she should stand in for the many panels being held at the China Science Fiction Convention 2019 in Beijing. The lines are long as thousands of young people, even some middle school students, have traveled from all over to attend. Chen herself spent two hours traveling from her university on the west side of the city all the way to the event.

"All the important panels and events start at 1 pm. So many people are lining up," she told the Global Times on Sunday, the second day of the largest sci-fi convention in China.

"After careful consideration, I decided to take a chance on getting in a panel called Historical Experience, Dreams, and Speculation in Modern Human Civilization."

Young people like Chen have traveled from every corner of the city for this convention, which includes talks from international sci-fi writers like Robert J. Sawyer, Russell Davis, Ian McDonald, and James Patrick Kelly as well as Hugo Award-winning writer Liu Cixin, China's sci-fi icon.

Thinking about the future

Each hall at the convention is packed with people hoping to meet their idols or have a chance to listen to international big names. Some of them are even willing to stand or sit on the floor behind the last row in the various halls.

Seeing this, Dai Jinhua, a speaker and professor from Peking University, joked that she must have walked into the wrong place because in her eyes science fiction is supposed to be a niche genre. She noted that while that may be true in many other countries, in China it is a booming genre with "supporting policies and hot investment capital."

The current sci-fi wave started in 2015 when Liu won the Hugo Award for his novel The Three-Body Problem. Following the award, various online novel platforms in China saw a huge influx of sci-fi stories as numerous young authors were struck by inspiration.

Zhou Zhonghe, the chairperson of the China Science Writers Association, said that in his opinion, imagination is something that has been missing from China's thousands of years of tradition throughout history. Zhou said he thinks that today's booming sci-fi industry will help young people stretch their imaginations, which fits with the slogan of this year's convention "Sci-fi for creation, fantastic imagination for the future."

In order to achieve this goal, a committee headed by China's heavyweight sci-fi writers was founded on Sunday - the Chinese Science Fiction Committee. Han Song, one of China's big four sci-fi writers, is its first director.

In Han's eyes, imagination is something far more important than knowledge and thanks to writers who are full of imagination, sci-fi literature has become a channel for the rest of the world to get to know China better.

Sawyer, a Canadian writer who has a number of awards under his belt including the Nebula Award in 1995 and the Hugo Award in 2003, said that was incredible about The Three-Body Problem wasn't that it won a Hugo Award, but that it was recommended by former US president Barack Obama, who said he found the novel a very fun read.

Sawyer, who is so popular in China that almost every one of his works has been translated into Chinese, also pointed out that sci-fi "has become the place where we can talk the most freely about ideas, even political ones."

He took the example of the Democrats and Republicans in the US, who won't sit at the same table in a bar and talk due to their different political stands or "labels."

"However, in science fiction, beyond labels we can talk about an alien world with two different cultures and principles of ideas in the far future. In that case, sci-fi is the most powerful tool to explore political ideas in the world," he said.

In Hollywood, movie adaptations have been a good way to popularize sci-fi literature. In China, this has been proven even more true by the great commercial and critical success of Chinese director Guo Fan's The Wandering Earth in 2018.

The movie adaptation of Liu's short story of the same name has a 7.9/10 on Chinese media review site Douban and earned 4.65 billion yuan ($661.4 million) at the box office to become the second-highest earning film in China until it was beaten by this year's animated fantasy film Ne Zha.

The success of The Wandering Earth has been like a rocket propelling China's film industry toward sci-fi movies. The rise of sci-fi film was covered at the convention, which set up a special competition in which potential sci-fi movie projects compete against each other.

Only 10 projects will win among 290 submitted pitches covering topics such as superpowers, robots, disasters, and AI. The winners will be decided by a panel made up of representatives from Chinese film studios such as Wanda Pictures, Beijing Culture and Tencent Pictures.

"Always keep the idea of Chinese style sci-fi in mind," Guo once said in an interview with the Xinhua News Agency, when recalling his experiences adapting Liu's short story to the big screen.

"The core pillars of the film are the traditional Chinese values of putting family and homeland first."