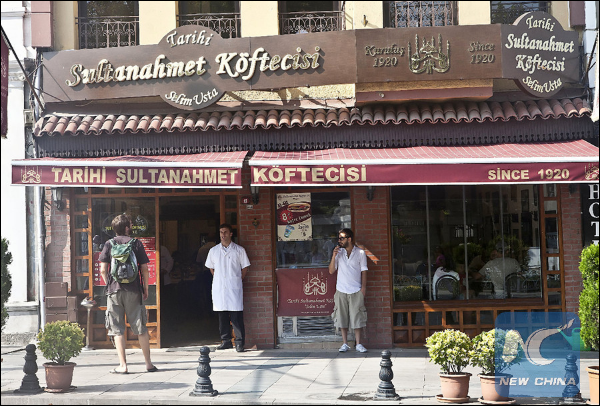 The exterior of the meatball restaurant Sultanahmet Koftecisi at Sultanahmet Square in Istanbul, Turkey, shot on July 31, 2018. (Photo: Xinhua)

A four-storey restaurant in Istanbul's historical peninsula has begun to get crowded for lunch at 11:30 a.m. local time (0930 GMT) on Tuesday.

The chefs were cooking the meatballs steadfast on a big grill in an open kitchen at the entrance, as tourists from all over the world started to place their orders one after another.

Founded in 1920 under the Ottoman rule, the restaurant named Sultanahmet Koftecisi, which means the one who makes meatballs, used to have long queues in front of it at Sultanahmet Square, neighboring the Hagia Sophia Museum and the Blue Mosque.

Its cheap yet delicious meatballs have been an attraction for tourists since its foundation.

Things, however, changed for the restaurants when Turkey became the target of terror attacks in 2015. Over 300 people have lost their lives in the attacks claimed by Islamic States (IS) militant group over the years.

Along with terror threat, the country has undergone a rough period over its diplomatic rows with Russia and several European countries.

The failed coup in 2016 also contributed to the reduction of tourists to Turkey.

Nearly half of the hotels and restaurants around the historic square had to close either temporarily or permanently, due to financial difficulties, recalled Timur Tezcakin, fourth generation owner of the family restaurant.

The business of the restaurant suffered a huge blow, with a decline of almost 60 percent in 2016, he noted.

"It was the darkest year in the nearly 100-year history of the restaurant," Tezcakin continued.

"We exerted too much effort not to tumble down the cliff," he said.

But the dark days have been left behind and the business is obviously recovering rapidly.

Currently, the restaurant serves around 2,500 customers per day during weekdays and 4,000 at weekends, according to Tezcakin.

Since the beginning of this year, the restaurant has fed the customers with nearly 40 tons of meatballs.

"We expect to hit the figures of our best days toward the end of this year," he noted.

The latest data also revealed that everything is going back on track rapidly for the country's tourism sector.

Turkey's tourism income soared by a year-on-year 30.1 percent to hit 7.04 billion US dollars in the second quarter of 2018, according to the Turkish Statistical Institute.

The country received more than 11 million tourists in the same period with an increase of 24.9 percent from last year.

Press reports noted tourism representatives expect to see some 40 million tourists by the end of 2018.

Turkey hosted more than 36 million foreigners in 2015, while the figures decreased sharply to nearly 25 million in 2016 and rose again to over 32 million in 2017.

At Sultanahmet Square, which has mainly hosted Arab tourists for the last two years, the tourist profile has also begun to diversify again, according to Tezcakin.

Along with Russian and European tourists, the number of visitors from the Far East, including China, has significantly increased, he said.

"People do not travel just for sea-sand-sun or cultural activities," he noted. "They also come here to pursue their interest in local cuisines."