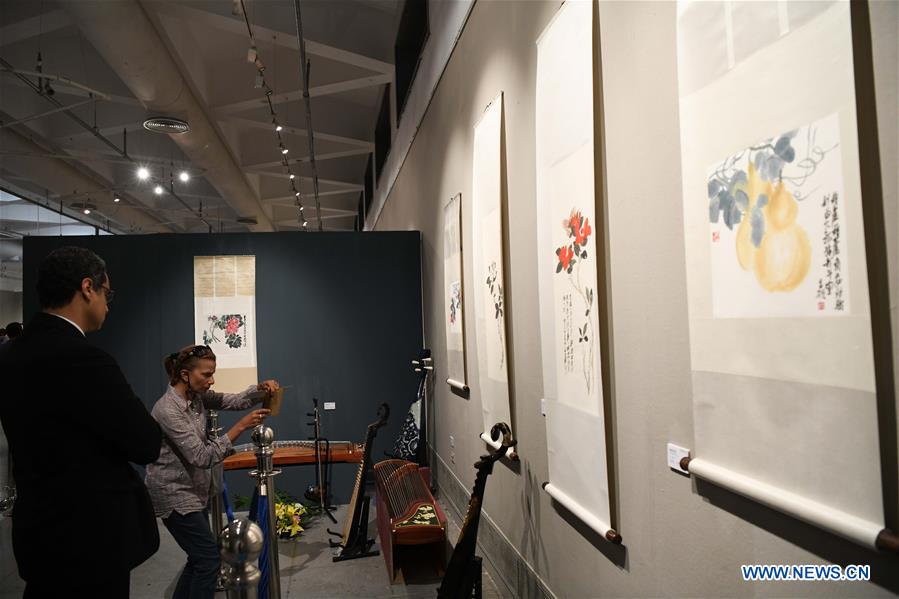 Visitors are seen in the Exhibition of Chinese Intangible Cultural Heritage in the Bibliotheca Alexandria, Alexandria, Egypt, on Aug. 8, 2018. (Photo: Xinhua)

"Culture is a fundamental human factor for enhancing cooperation between peoples," said Mohamed Sultan, governor of the Egyptian coastal city of Alexandria, amid an ongoing exhibition of the intangible cultural heritage in Shanghai, China's most populous city.

Egypt and China were connected with trade, economic and cultural ties over thousands of years, Sultan told Xinhua while inspecting unique Chinese heritage pieces being displayed in the Bibliotheca Alexandria.

The first session of the International Tour Exhibition of Chinese traditional Fine Arts was opened on Wednesday in the historical library of Alexandria.

Under the topic "Culture across Ancient and Modern," the Exhibition of Shanghai Intangible Cultural Heritage in Daily Life, which will last until Aug. 27, has showcased more than 130 pieces of artifacts including Jinshan farmer paintings, Shanghai-style woolen tapestries, Shanghai-style silk works, opera customs, jade and bamboo carving works and other cultural heritage objects from Shanghai, sister city of Alexandria for 26 years.

Shanghai will also host an Egyptian Child Exhibition that will include drawings and paintings about Alexandria on Sept. 23, Sultan noted.

Alexandria was a historical city where the ancient Greek and Rome civilizations met and integrated with each other, while the library itself was the meeting point for the businessmen who traded on the Silk Road.

By holding the exhibition in the library, which enjoys a high reputation as a cultural center along the Mediterranean, China and Egypt have broadened the Chinese culture to a new horizon, Meqaty said.

Meanwhile, the exhibition will encourage the Egyptian youth to know more about their Chinese peers through cultural communication, she added.

"Dialogue between young generations from both sides is necessary to bridge gap between the two peoples," Meqaty explained.

Shi Yuewen, a Chinese cultural counsellor in Egypt, said the mutual understanding between the two countries isn't sufficient because of geographic distance and language.

There should be more active communications between the two peoples through exhibitions mirroring cultures and heritages, he noted.

The exhibition is divided into four areas: "Life as painting," "Gorgeous Brocades and Silk Articles," "Beauty in the Square" and "Elegant Melody."

Watching the Jinshan farmer painting "Golden harvest, return from fishing," which was featured by novel design, bright colors and simple shapes, Mahmoud Atta, a 22-year-old trainer in the Model African Union, said he was stunned.

"I was really surprised to see very simple but sophisticated paintings that tell stories of the daily life of people," Atta said.

The performance of the folk music players on traditional wooden instrument with their dazzling dresses at the entrance of the exhibition was enough to envision the beauty of Shanghai, he added.

Al-Sayed said she was so eager to know about the Chinese culture, describing the exhibition as "the best opportunity for getting closer to the Chinese."