Du Xuan (center), an engineer at China Construction Third Engineering Bureau Group Co, on site at a medical complex she is responsible for in Lanzhou, Gansu province. (Photos: Xinhua)

Drawing sketches and formulating plans on construction sites in the blazing sun are near-daily activities for 33-year-old Du Xuan.

A female architect, she's somewhat of a rarity in the male-dominated industry.

The one and only female engineer at China Construction Third Engineering Bureau Group Co is now the head of the company's key project, a medical complex for women and children in the city of Lanzhou, Northwest China's Gansu province.

"I was born for this job. Ever since I was little, I have been fascinated by the magic of building houses," she says. Her father, also an architect, lived near a construction site with his family, where Du spent her childhood watching workers erecting formwork, laying concrete and tying steel rods.

In her college years, Du changed her major from computer science to civil engineering. "Back then, only eight out of about 80 students in our class were girls," says Du.

Du started an internship in her junior year, ahead of most of her classmates, in order to attain more work experience and gain an edge over her peers.

Tough as it may be working on construction sites, Du never shies away from challenges, and she was recruited by China State Construction Engineering Corp amid fierce competition.

"Gender discrimination was easy to spot in my workplace at the very beginning, but I firmly believe that a person's competence should not be judged by gender," says Du.

Through nine years of hard work, Du has grown into a self-made chief engineer. Streaming with sweat and answering frequent phone calls, Du gets along well with her male co-workers on the construction sites with a little help from her feminine side.

"Tenderness is Du's talent. She can always resolve crises and confrontations with her witty remarks and gentleness," says Wang Sanji, one of Du's male colleagues. 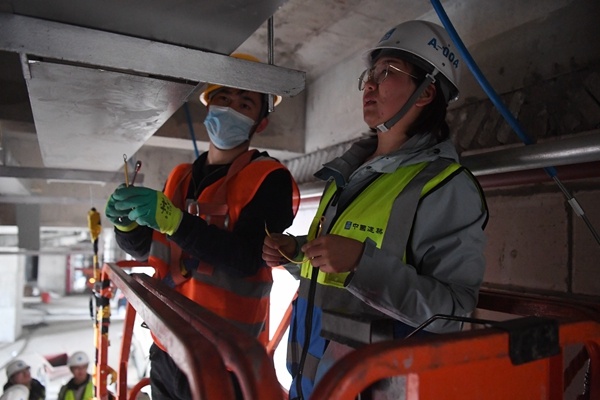 Du instructs a worker at the construction site.

Luo Xiaomei, 47, who worked on Du's construction site, was maneuvering a lift carefully inside a 22-story building.

"The lifts are used to transport workers and construction materials. During the busiest hours, I have to finish more than 10 such trips a day," Luo says.

Six out of eight lift operators on the construction site were women. "Women tend to be more careful, patient and focused, and such characteristics make them perfectly suited for the job," Du explains.

Nowadays, more Chinese women are bucking conventional gender stereotypes and pursuing their careers in once male-dominated industries. Diversified employment opportunities on offer have created a perfect stage for them to show their strength.

"More young women are now opting to take training courses for electricians and excavators rather than courses focused on embroidery, makeup and hairdressing," says Tuo Fengying, headmaster of the school.

Han Linlin, 21, was the first female student in the school's excavator training program.

"Excavator drivers are often well paid and it is both cool and challenging for me to operate such a bulky machine," Han states, offering her reason for choosing the training course.

A topic on "How does it feel for a woman to work in a traditionally male-dominated industry?" is among the most-discussed on Zhihu, the Quora-like knowledge-sharing platform.

"It is now an era where women can achieve success via their own endeavor. When facing tests and difficulties, what really matters is one's wisdom and execution, instead of gender," writes one user, nicknamed "He Jing is back", in the comments.

Such great changes in the workplace reflect the comprehensive upgrade of Chinese women's abilities and the realization of their potential, a testament to the progress in the country's efforts made to safeguard the female population's rights and interests, according to Niu Fang, associate professor with the School of Philosophy and Sociology at Lanzhou University.