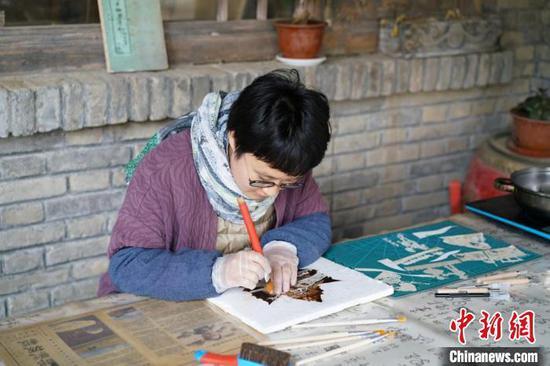 Long Yuyu is carving on a leaf on Sept. 12. (Photo: China News Service)

Affected by her leaf carving family, Long grew interested in the craft as a young girl and began creating professional works in 2008.

Long has carved more than a hundred works using phoenix tree leaves over the past decade and displayed them on social media as modern artifacts.

"I hope more people can learn about this endangered craft with a history of thousands of years through my efforts and make it live on," she said.

Originated from Western Zhou Dynasty (1046 BCE – 771 BCE), leaf carving boasts a history of more than three thousand years. Less people are willing to learn it due to the complicated process and high labor cost, according to Long.

A leaf carving includes leaf selection, cleaning, soaking, air-drying, waxing, among which separating veins from the mesophyll is the most difficult part, Long explained.

"I have confidence in passing on this ancient craft," Long confirmed.

Long added she would like to compile a Chinese leaf carving history so as to popularize the craft.