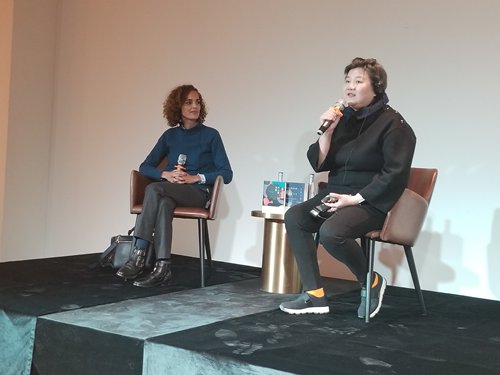 Leïla Slimani (left) and Hong Huang address the issue of gender equality at a forum in Beijing on March 8 (Photo: Global Times)

Contrary to common misunderstandings, feminism is not an "anti-male" agenda, but a movement concerned with improving the lives of women and creating a more equal world for both genders. That was the strong message that a celebrated French female writer and an influential Chinese publisher delivered to the Chinese public earlier this month at an event for the ongoing Francophonie Festival in China. Amid the storm of worldwide feminist movements fueled by #MeToo, discussions and thoughts about women's social status and feminism featured prominently during a town hall talk on March 8 with award-winning French writer Leïla Slimani, the youngest winner of the Prix Goncourt award for her 2016 novel Chanson Douce. The most read book in France that year, its Chinese translation has a large readership in ChinaSitting down with celebrated Chinese publisher and columnist Hong Huang, Slimani shared her experiences and thoughts on the lives of women in modern society and the true meaning of feminism. A universal problem "The very question of asking a woman how to keep a balance between her work and her family reflects gender inequality because no one asks a man about that," Slimani said when asked about how she manages to be a mother with a successful career. That problematic idea that women who focus more on their career than having and raising kids are selfish and irresponsible is still very common in many places today, according to Slimani, and this has led to women struggling with becoming the "perfect woman" who can handle both work and home equally well. "Maybe it's time to admit that we cannot do both that well and men need to share more work at home," said Slimani. According to her observations, women are often paid less than men in France, which results in women having a lower economic status in the family. This then pushes many of them to become housewives or to shoulder more responsibility in the household and thus reinforces traditional stereotypes in what is a vicious circle. However, Chinese counterparts seem to be less affected by this vicious circle when it comes to career and economic status within the family. According to 2017 statistics from sohu.com, a web portal in China, nearly 70 percent of women of working age are employed in China while in France this number sits around 62 percent, followed by 60 percent in New Zealand and 58 percent in the US. Moreover, the 2018 Hurun List of Self-Made Women Billionaires shows that 62 out of the 102 listed entrepreneurs are from China, with Beijing being home to the highest number of the world's wealthiest women.  "I have to say that in China women's social status is based more on their economic power, rather than gender. Rich women are not likely to be treated any differently than men," noted Hong, adding that it is often women living in poverty that suffer the most from gender discrimination and therefore "economic independence" is the key to improving women's social positions.   Complicated social and historical factors lie behind women's rising position in China. A nationwide campaign encouraging women to work outside the home took place in the 1950s and the slogan "women hold up half the sky," proposed by Chairman Mao Zedong, spread like wildfire through the country. Public education of gender equality, marriage laws and the one-child policy also helped boost the social status of Chinese women. However, when it comes to house chores and childcare, women are still the major force in China as the perception of a good mother and hardworking wife for women is difficult to change. Statistics from sohu.com shows that in 62 percent of households women outwork men at home, while in 20 percent of families women do all the household chores. The pressure to be both a good wife and a qualified employee has led to many Chinese women complaining on social media that they are the "hardest working people" in China. "The problem is universal here and overseas. Women should not feel guilty for pursing their own development. Sometimes we cannot do both, and that is fine," said Hong. For women, not 'against men'As the #MeToo movement continues to spread worldwide, some counterproductive behavior has cropped up here and there. In South Korea, a sense of "gynephobia" is on the rise as some men have begun to deliberately avoid their female colleagues, worrying that the latter might file complaints about their behavior, according to a report by South Korean newspaper Chosun Ilbo. Experts say that this practice only leads to new disadvantages for women at the workplace, as it puts the two genders at odds with each other. Regarding this "gynephobia," both Slimani and Hong emphasized that feminism is not "against men," but rather is about doing more to protect women and ensure they are treated equally.  "Feminism should be a humanistic concern that protects women's basic rights. I'm not against anyone," said Slimani. She indicated that #Metoo is about making women's voices heard, not about causing women and men to become enemies. Both genders should be treated equally. Hong noted that the word "feminism" is often misused in Chinese society. "I think the word is demonized in China. It should be about gender equality and giving women a voice, rather than anything else," Hong said. She pointed out that some people in China who tout the idea of feminism are just using it as a guise to take advantage of men. The practice of women requiring men own apartments and cars before being willing to tie the knot is one such example. This type of "bad feminism," which Hong noted has nothing to do with feminism at all, is so common that the slang term weinüquan zhuyi, or "fake feminism" has arisen on social media in China to describe the phenomenon.