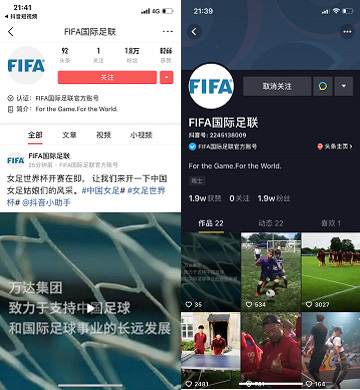 FIFA’s official accounts on Douyin and Toutiao (Photo: China Plus)

FIFA has launched official accounts on China's popular social media platforms Douyin and Toutiao to extend its digital outreach in the most populous country, announced the world football governing body on Friday.

It makes FIFA the first football federation on the two Chinese-based digital platforms, with 500 million monthly active users on Douyin and over 700 million users on Jinri Toutiao.

The new accounts will deliver news and football content to FIFA's Chinese fans through the two platforms, according to the FIFA release.

"Building on FIFA's existing presence in the country with Weibo, FIFA will now be able to offer more content to fans across China through the two platforms and will expand its digital presence in country to four platforms, with FIFA accounts already active on WeChat and Weibo," it read.

Douyin, a short-form video platform, has become one of the most downloaded apps worldwide, while Jinri Toutiao is a news aggregator.

"In March 2018, FIFA launched its first digital platforms for Chinese fans. With the growing desire for football content on FIFA's digital channels from fans in the country, we are excited to expand our digital presence and to better serve football and efootball Chinese fans on a daily basis," FIFA's Chief Digital Transformation and Innovation Officer Luis Vicente said.

FIFA became the first football organization to launch a WeChat Mini Program in March, 2018 and grew over 10 million social followers in the first 12 months, becoming the fastest growing sports organization online in China.