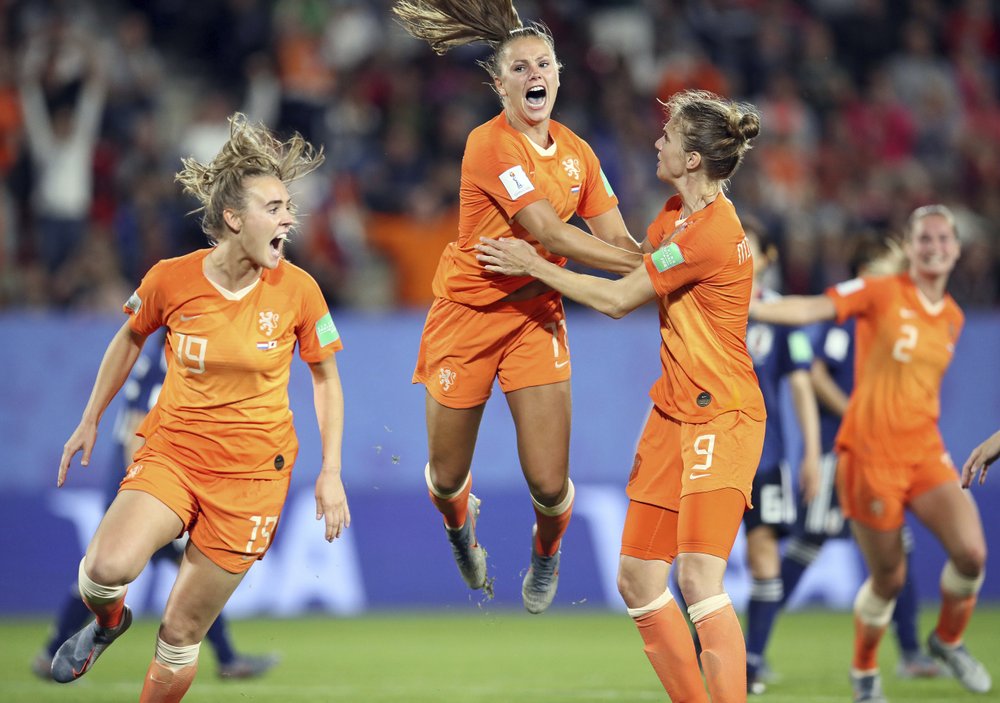 Netherlands' Lieke Martens, center, celebrates after scoring her side's second goal from the penalty spot during the Women's World Cup round of 16 soccer match between the Netherlands and Japan at the Roazhon Park, in Rennes, France, Tuesday, June 25, 2019. (Photo: AP)

PARIS, July 31 (Xinhua) -- FIFA announced on Wednesday that its Council has unanimously agreed to a proposal to expand the number of participants at the FIFA Women's World Cup from 24 to 32 as of the next edition of the tournament in 2023.

According to FIFA, the Council exceptionally made the decision remotely instead of during its next meeting scheduled for October 23-24 in Shanghai, as the bidding process for the 2023 tournament is already underway, and nine bidders are initially expected to submit bid books by October 4.

The new-format quadrennial tournament will have eight groups of four teams.

After the deadline for bid submission in December, publication of Bid Evaluation Report is expected in April 2020, with an expected appointment of hosts the following month.

The FIFA administration will consult with the confederations in terms of slot allocation, and it should be approved by the FIFA Council.

"The astounding success of this year's FIFA Women's World Cup in France made it very clear that this is the time to keep the momentum going and take concrete steps to foster the growth of women's football," said FIFA President Gianni Infantino, who had hailed the tournament held in France this summer "the best Women's World Cup ever".

"I am glad to see this proposal - the first of several - becoming a reality," he added.

"The expansion reaches far beyond the eight additional participating teams. It means that, from now on, dozens more member associations will organise their women's football program knowing they have a realistic chance of qualifying.

"The FIFA Women's World Cup is the most powerful trigger for the professionalisation of the women's game, but it comes but once every four years and is only the top of a much greater pyramid. In the meantime, we all have a duty to do the groundwork and strengthen women's football development infrastructure across all confederations," Infantino pointed out.