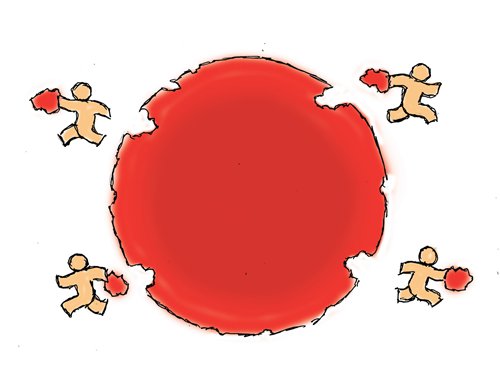 The film "Shoplifters" by Japanese director Hirokazu Kore-eda has moved a large number of audiences since its release in China earlier this month. The winner of the Palme d'Or at the 71st Cannes Film Festival in May tells the story of a family making a living through theft and fraud, which, however, is all brought to light in the end.

The touching tale reveals the deep love each family member shows toward another, moving many to tears in the theater. Meanwhile, it exposes Japan's social ills - child abuse, widened wealth gap, and harsh realities facing women and elderly people. It's both the soft-hearted and cold-blooded feelings the movie pours out that are thought-provoking and also the reason why the film took the top prize at Cannes.

Actually, the social issues it reflects are nothing new but have only exacerbated in the last six years of Shinzo Abe taking office. Statistics released by Japan's National Tax Agency last September show that the annual income of around 11.3 million Japanese residents was below 2 million yen ($18,000) in 2017, a figure that saw 15,000 more people enter the fold over the previous year. Meanwhile, the population which earns more than 25 million yen every year is on the rise, and has crossed 120,000 people.

In addition, the average annual income of regular employees was 4.86 million yen while that of temporary staff was 1.72 million yen. Obviously, the wealth gap problem has not been solved by Abe over the years. In fact, it has worsened.

Besides, Japan's childhood poverty issue has gained notoriety. According to a 2016 report of Save the Children, an international NGO committed to promoting children's rights, one in six Japanese children under the age of 17 lives in poverty.

As of April 2018, there are 2,286 children's cafeterias across Japan, a steep rise from 319 in 2016. Over 1 million kids once ate at such canteens. The increase reflects a rise in the number of underprivileged children on the one hand and on the other shows that many parents are too busy to spend time looking after their children. Nonetheless, such an issue is out of place in a developed country like Japan.

The scandals Shoplifters exposed probably made a miffed Abe desist from greeting its makers after it won the highest Cannes prize. Japanese achievements at the PyeongChang Winter Olympic Games in South Korea and the FIFA World Cup in Russia had Abe promptly tweet congratulations. But he never did the same with Kore-eda.

Kore-eda is quite bold to ferret out the dark side of the seemingly glamorous Japanese society. Therefore, he is regarded by some right-wing conservatives as being anti-Japanese for exaggerating the ugly, awful side of the country. In fact, Kore-eda is just "the little boy" who cries out the truth about the "Emperor's new clothes." A familiar presence in Cannes, Kore-eda has been trying to wake up fellow Japanese and the international community to see the reality - the ever-increasing wealth gap.

For a long time, the striking gap between the rich and the poor, inequality in children's access to education and the elderly's access to pension have been presumed to exclusively belong to the domain of developing countries. But we learned from Shoplifters that these intractable problems also exist in the developed world, which could be more severe than in developing nations.

While developed countries scratch their heads to resolve conundrums facing the world, developing nations may have better recipes. This realization should not be missed.