CULTURE Film probes history of Native Americans in the US military

Film probes history of Native Americans in the US military 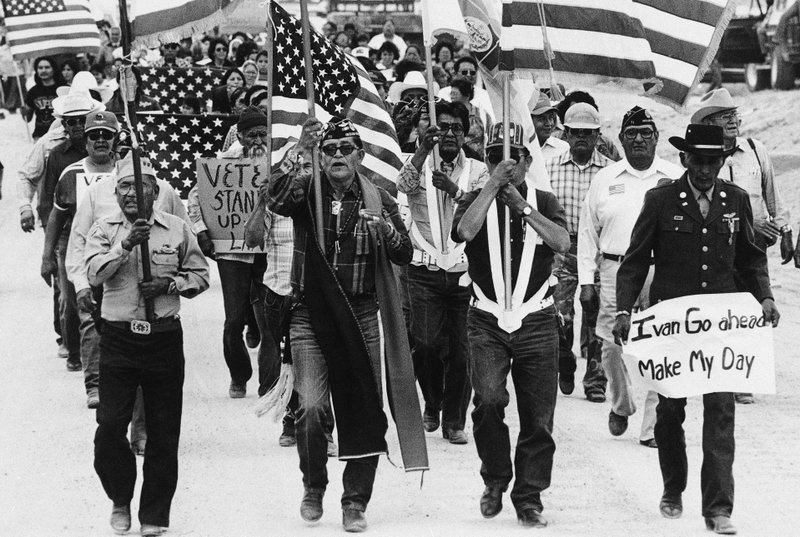 In this July 8, 1986, file photo, World War II Navajo veterans and supporters march through the reservation in a show of solidarity against giving up any of their land to the Hopis in Arizona. (Photo: AP File)

Before Chuck Boers joined the US Army, the Lipan Apache member was given his family’s eagle feathers. The feathers had been carried by his great-great-great-grandfather on his rifle when he was an Apache scout.

They also were carried by relatives who fought in World War I, World War II, Korea and Vietnam. In 2004, Boers had the feathers with him during the Battle of Fallujah in Iraq. “I felt like I had my family with me to protect me,” he said.

The documentary exhibits the mixed feelings some Native Americans felt toward the US military and how tribal members embraced those who served as “warriors.”

“From just about the beginning of the United States itself, the government has fought various wars against Native nations. And that’s the irony,” Patty Loew, director of the Center for Native American and Indigenous Research at Northwestern University, said in the film.

But Native Americans, from tribes in Oklahoma to nations in Washington, joined the US military to honor their “end of the treaty” that the US government previously broke, Loew said.

At the onset of World War I, the first generation of Native Americans after the so-called Indian Wars began joining the US Army even though they weren’t considered citizens or allowed to vote. Returning veterans, and also those from World War II, earned accolades for their service. For example, Comanche and Navajo Code Talkers in World War II were credited with passing secrets amid hostile fighting.

The returning veterans began demanding the right to vote and fought against discrimination. For example, Miguel Trujillo Sr., a Marine sergeant in World War II and a member of Isleta Pueblo in New Mexico, returned and waged a legal battle to overturn that state’s law that barred American Indians living on reservations from participating in elections.

Director Larry Hott said the veterans in the film believed military service was part of their family history and wasn’t just about a way to escape poverty. It’s part of a legacy that goes back generations, he said.

“Many have waited a long time to talk about this,” Hott said. “One veteran told me he hadn’t even told his wife about his experiences.”

Retired Army Sgt. Maj. Lanny Asepermy, who is Comanche and Kiowa, said after the Comanches surrendered to the US in 1875, the tribe’s warrior tradition was hurt. Then some Comanche joined World War I.

“We became warriors again,” Asepermy said. He grew up seeing photos of relatives in the military at his grandparents’ home. “I’ve always wanted to be a soldier. I didn’t want to be anything else.”

He’d fight a year in Vietnam. Before he left, his grandmother prayed over him in the Kiowa language and placed medicine on him. “A couple of times in Vietnam, I could have gotten killed. Was it luck?” Asepermy said. “I think it was because of the prayers my grandmother gave me.”

The one-hour documentary co-produced by WNED-TV Buffalo Toronto and Florentine Films/Hott Productions, Inc., is scheduled to air on most PBS stations on Monday.