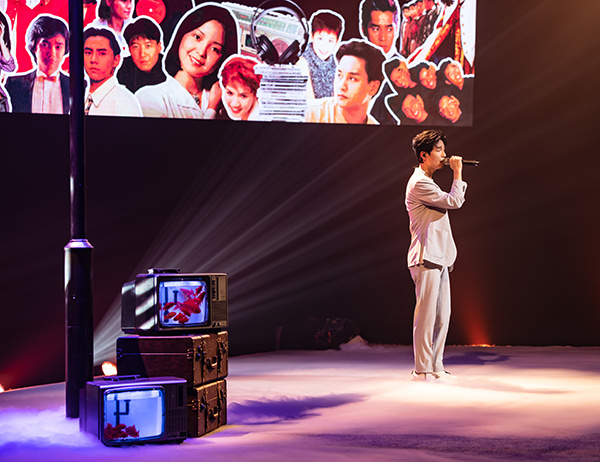 Walking on to a stage shrouded in an atmosphere of nostalgia, singer Chen Chusheng closes his eyes as he croons The Days We Spent Together, the closing song of the Hong Kong film Casino Raiders II, starring Andy Lau.

The song, first sung by Lau, was once a big hit, and a firm favorite in the karaoke booth.

So when Chen's scene - as part of the online show Hi! Movie Music - was streamed on the short-video app Douyin on Aug 12, it drew tens of thousands of viewers, with some saying it reminded them of the golden era of Hong Kong cinema.

Despite music being a crucial part of films and TV dramas that can make or break the audience experience, local industries have yet to fully recognize the importance of soundtrack and score creation, observes Garand Wu, a veteran who has worked in the entertainment sector for more than two decades.

A 2019 report from the Communication University of China shows the country's music market had seen total sales of more than 374.7 billion yuan ($54 billion) in 2018, but domestic movie and TV music merely accounted for a tiny part, says Wu, who has served as the managing director of Universal Music China since 2013.

As an effort to develop the niche market, the domestic division of Universal Music Group has recently released Hi! Movie Music, an original online series that combines interviews and performances to raise public interest in film and TV music.

Aside from Chen, dozens of celebrities have joined the program, including pianist Lang Lang, his wife and fellow pianist Gina Alice Redlinger, singer Sa Dingding and jazz pianist Luo Ning.

In addition to the show, which consists of six to eight episodes, Universal Music China has also established Magic Muses, the company's first Chinese music label in a decade, dedicated to soundtracks and scores for TV and movies.

With the global distribution and talent resources from its parent company, Universal Music China will use the label to bridge local musicians and filmmakers to create bespoke music works for Chinese films and TV dramas.

The first such project is underway. Composers and musicians from Magic Muses are now working on the original soundtrack for My People My Homeland, one of the most anticipated films set for release during the weeklong National Day holiday, from Oct 1.

Speaking about the project, Wu said: "Some of the world's most successful musical works are rooted in local culture and history. As a great country, with a long history of over 5,000 years, China's culture and diversity of landscapes will be a treasure trove that can provide countless inspirations for the soundtrack."

Magic Muses' musicians have been on board since July, preparing the music for the film for more than two months.

"Movie music is not merely a string of notes, but a craftwork which needs to be tightly in sync with the unfolding of the story, and the development of the characters. So leaving enough time ahead for the music creation is very important for the success of a movie," says Wu.

However, most domestic filmmakers give only a few weeks in the post-production phase for the music part, while foreign blockbusters usually start work on the music two years in advance, explains Wu.

"We are delighted to see China's music market has expanded continuously in recent years. When I joined Universal Music China in 2013, China was listed as the 19th-biggest music market in the world by the International Federation of the Phonographic Industry, but now it has risen to seventh," says Wu.

Speaking of China's film industry, which now has the world's most screens and become the world's second-largest market in terms of box office, Wu says he believes the movie music genre will have a promising future.