Little Caesars Arena in Detroit will finally host its first playoff game — in what is probably the last chance the Pistons have to make their series against Milwaukee competitive. 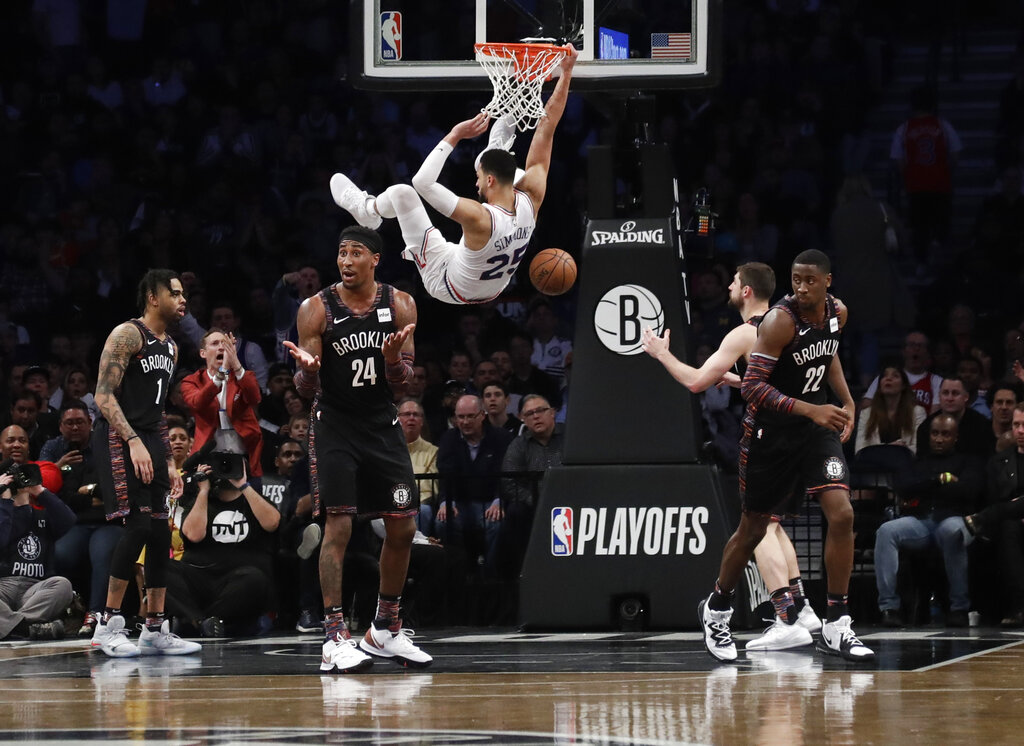 The Milwaukee-Detroit matchup is one of two series shifting sites Saturday. Houston and Utah will also play Game 3 in Salt Lake City. There are a couple Game 4s on tap as well: Philadelphia at Brooklyn, and Denver at San Antonio.

The Pistons are in their second season at their new arena, but even after moving downtown, they've had their share of small, dreary crowds — similar to the atmosphere during their final years at The Palace of Auburn Hills. But there's every reason to expect a more charged scene Saturday night. Little Caesars Arena has hosted the NCAA and Horizon League tournaments in basketball, but there have been no home playoff games yet for the Pistons — or for the Red Wings, who also play there.

"I hope we're building trust with our fans by getting the first step of getting into the playoffs, because we have some great, knowledgeable basketball fans here in Detroit," Casey said. "We've got to make sure we come out and represent them, but we need all them to come out the way they treated us in Milwaukee — like we stole something."

The Pistons were drubbed in the series opener 121-86. They played better in Game 2, even leading at halftime, but they still lost 120-99 to the top-seeded Bucks.

Houston is also up 2-0 in its series against Utah. James Harden is coming off a triple-double of 32 points, 13 rebounds and 10 assists Wednesday night. The Rockets won the first two games by a combined 52 points.

Philadelphia leads Brooklyn 2-1 after winning on the road Thursday night. The 76ers were held to 102 points in a Game 1 loss but have been impressive since, winning 145-123 in Game 2 and then 131-115 on Thursday . Tobias Harris made all six of his 3-point attempts in Game 3.

A look at Saturday's games:

NEED TO KNOW: Philadelphia coach Brett Brown isn't sure if Joel Embiid will play, but the 76ers were just fine without their All-Star center in Game 3.

KEEP AN EYE ON: Brooklyn's lineup combinations. D'Angelo Russell, Spencer Dinwiddie and Caris LeVert all had big games when the Nets won the opener, so coach Kenny Atkinson needs to figure out how much he can get his best ball handlers on the floor for more time, while still being able to rebound and defend against a much bigger lineup.

INJURY WATCH: Embiid worked out Friday at practice but Brown said he didn't have a gut feeling either way whether Embiid's left knee would feel well enough for him to play. The Sixers have depth behind him with Greg Monroe and Boban Marjanovic, who combined for 23 points and 21 rebounds in Game 3.

"It's not a knock on anyone else, but there is a significant drop-off when you take an All-NBA player out of the lineup," guard JJ Redick said.

PRESSURE IS ON: Joe Harris. Brooklyn's guard led the NBA in 3-point percentage during the regular season but was 0 for 4 behind the arc in Game 3. He also struggled to stay close to Redick on defense, and Redick responded with five 3s and 26 points. The Nets need Harris to be better on both ends.

NEED TO KNOW: Denver has won only six of its last 37 road games in the playoffs, and three of those came during the 2008-09 season, when the Nuggets reached the conference finals. That's the only time Denver made it past the first round in its last 11 postseason appearances. On the road against San Antonio specifically, the Nuggets have lost four straight playoff games and 13 straight regular-season games.

KEEP AN EYE ON: Denver was second in the NBA with 11.9 offensive rebounds per game during the regular season, but San Antonio has bested the Nuggets in that category during this series. The Spurs have 36 offensive rebounds through three games, and Denver has 30.

MARQUEE MATCHUP: White had a big game for the Spurs in Game 3, but Denver's Jamal Murray finished Game 2 with a flourish, scoring 21 of his 24 points in the fourth quarter.

PRESSURE IS ON: Nikola Jokic has averaged 17.7 points in the series, which certainly isn't bad. But with Denver on the road and trying to avoid a 3-1 deficit in the series, the Nuggets' 7-footer will be on the spot.

KEEP AN EYE ON: Pat Connaughton scored 28 points for Milwaukee over the first two games, shooting 12 of 16 from the field. It's hard enough to beat the Bucks when Giannis Antetokounmpo and Eric Bledsoe are rolling, but if players like Connaughton are making major contributions, these games can become blowouts.

PRESSURE IS ON: Detroit picked up Thon Maker in a trade this season, and he could be an intriguing player for the Pistons in the future, but Griffin's injury has forced him to play an important role in this series, and he has only 10 points so far. He went 0 for 9 from 3-point range over the first two games.

NEED TO KNOW: The series has been surprisingly uncompetitive thus far, with Houston leading by at least 17 points throughout the second half of its victory in Game 2, after leading by double digits for the entire fourth quarter of the opener.

KEEP AN EYE ON: Harden's playmaking. Harden is getting everyone involved, with 10 assists in both games after he managed just 4.8 per game against Utah during the regular season.

TELLS THE STORY: Utah held opponents to an EFG% of 50.7 during the regular season, the second-best defensive mark in the league in that category. In this series, Houston is all the way up at 58.3 against the Jazz.

PRESSURE IS ON: Utah's offense. Even a defense as tough as Utah's isn't going to stop Houston entirely, so the Jazz have to find a way to cobble together more points.