BEIJING, Dec. 29 (Xinhua) - Today's Chinese artists now have the opportunity to preserve their works much longer than the masters who painted hundreds of years ago.

Chinese researchers have developed a non-flammable version of Xuan paper that has high thermal stability, according to the Chinese Academy of Sciences (CAS). 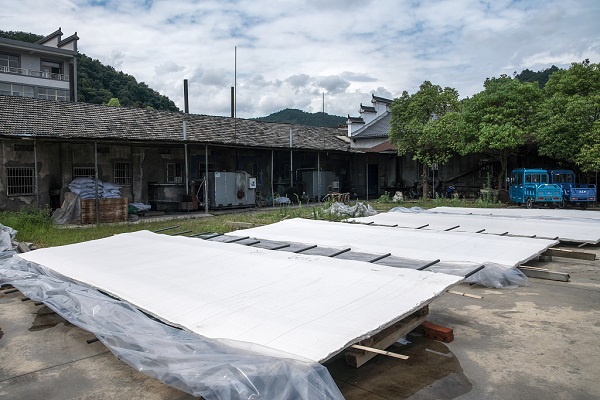 Xuan paper, a type of handmade paper, was originally produced in ancient China and used for both Chinese calligraphy and paintings. The procedure of making Xuan paper was listed as a world intangible cultural heritage by UNESCO in 2009.

The raw materials need to produce Xuan paper are found in Jingxian County, east China's Anhui Province and as of late, are in short supply.

The traditional handmade method of Xuan paper involves more than 100 steps and takes nearly two years. It has a low output and high cost. Xuan paper made with organic materials often suffers from degradation, yellowing and deteriorating properties during the long-term natural aging process.

Furthermore, the most lethal problem of traditional Xuan paper is its high flammability.

Researchers from the Shanghai Institute of Ceramics of the CAS developed a new kind of highly flexible Xuan paper with excellent fire resistance, long durability, high whiteness and excellent anti-mildew qualities benefiting from its totally inorganic origin, which is far superior over traditional Xuan paper.

The inorganic analogous Xuan paper had no obvious signs of deterioration after a simulated aging process of 3,000 years.

Its whiteness remained at 86.7 percent after the simulation, while the traditional Xuan paper had less than 42.5 percent whiteness.

The production process of the newly-developed Xuan paper takes only 2-3 days to make instead of the usual two years for traditional Xuan paper.

The excellent nonflammability and high thermal stability of the new Xuan paper can safeguard China's precious calligraphy and paintings, documents, books and archives for a very long period of time.