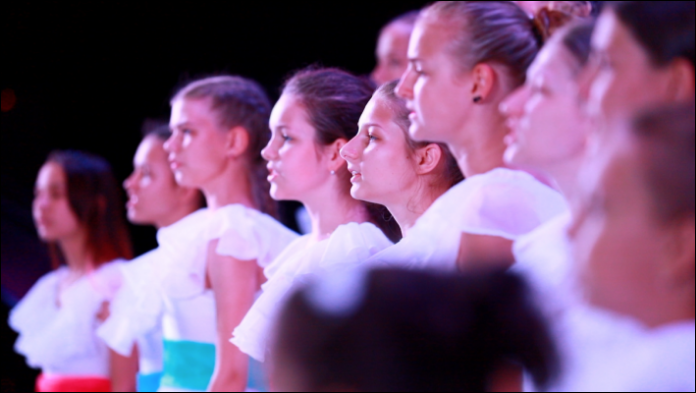 A 33-member-youth-choir from Russia’s Khabarovsk performs on stage. ( Photo: CGTN)

Summer may be half over, but it doesn’t mean the fun is ending any time soon. In the northeastern Chinese city of Harbin, the city’s first International Children’s Chorus Festival is being held. In addition to local choirs, a group of young Russian singers flew in and joined the performance.

Russian choral music has deep roots and can be traced back to the 1500s. In China, its development took off in the last century.

Chinese students were impressed by the performance.  "The Russian choir is all girls, but they sang with great vigor,” said one student.

“They looked relaxed on the stage but with a lot of passion,” said another.

In addition to the Russian choir, some 500 young singers from across China also sang onstage. This is the first-ever show put on for Harbin’s International Children’s Chorus Festival. And some 1,000 kids from both Harbin and elsewhere showed up to watch.

The purpose of the event is simply to spark more interest for extracurricular activities among young people in China. Educators in Harbin and Russia also plan to expand the current program to include more activities beyond the chorus festival.

“We hope to use this kind of event to enrich students lives during the summer break. And we are planning to expand our collaboration with Russian friendship cities to hold other events including art and sports,” said Zhao Xiaosong, the director of intentional cooperation and exchange at Harbin Education Bureau.

A total of three shows are planned for this year’s festival.