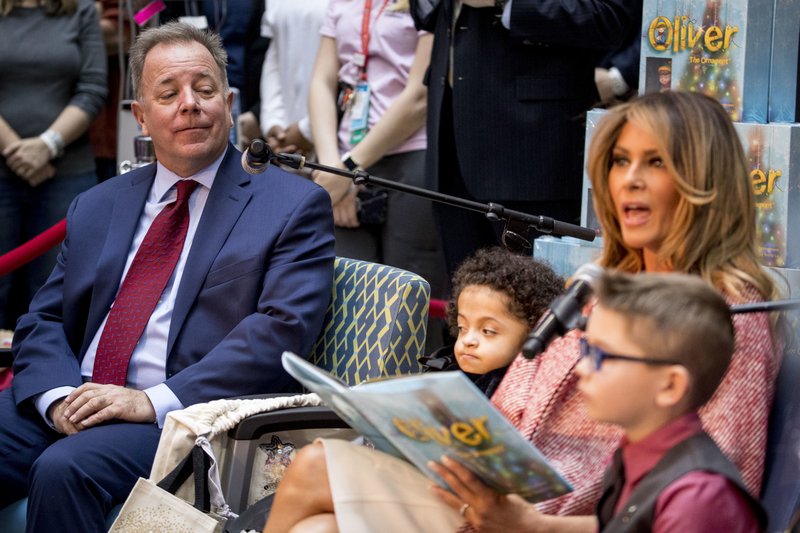 Melania Trump spread her anti-bullying message on an annual Christmas season visit to a Washington children’s hospital on Thursday, reading a story about a Christmas ornament named Oliver who is bullied by other ornaments in a family’s collection.

“Wishing you a Merry Christmas and a happy and healthy new year,” the first lady said after she finished reading “Oliver the Ornament” at Children’s National Health System. The author, Todd Zimmerman, sat a few feet away.

Mrs. Trump launched an initiative earlier this year to teach kindness to children, naming it Be Best.

Zimmerman thanked the first lady “from the bottom of my heart” for inviting him to be part of the visit, an annual tradition that dates to first lady Bess Truman, who served in the role from the mid-1940s to 1953.

“It is such an honor and I’m humbled by your kindness,” Zimmerman added. “I also want to thank you for everything you do to promote kindness through your Be Best foundation and all of your daily activities. It’s that same type of kindness that we’re trying to promote with ‘Oliver the Ornament’ and it’s that same message that I hope all of you receive this Christmas season and throughout the entire year.”

Mrs. Trump is using the initiative to encourage children and young people to be kind online.

Melania Trump is keeping up the first ladies' tradition of a Christmas season visit to a Washington children's hospital. (Dec. 13)

The first lady recently told ABC News during an interview in which she promoted Be Best that she could be “the most bullied person” in the world, judging by “what people are saying about me.” Critics have pointed out that her husband, President Donald Trump, routinely mocks people on Twitter.

Before taking a seat in front of a towering Christmas tree in the hospital’s atrium, Mrs. Trump toured part of the neonatal intensive care unit and met with three families and children who had been treated there after they were born prematurely at 24 weeks.

Mrs. Trump sat with the families while the children played and listened as Nikki Watkinson told the story of her son Grayson’s early delivery in her husband’s truck during a snowstorm.

“You will have an incredible story to tell him,” the first lady replied.