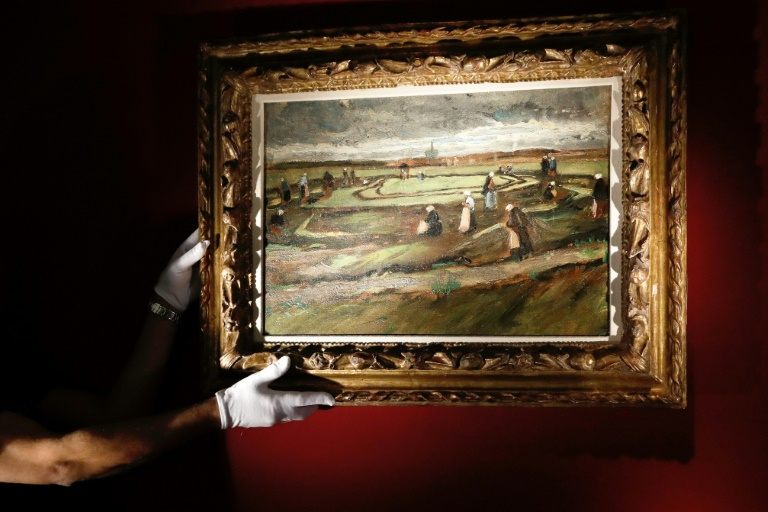 The painting "Women Mending Nets in the Dunes" by Dutch painter Vincent van Gogh will be sold at Artcurial auction house in Paris in June (Photo: AFP)

The first Van Gogh painting to go under the hammer in France in more than two decades was unveiled Wednesday.

"Women Mending Nets in the Dunes", which the Dutch artist painted early in his career at Scheveningen near The Hague, is expected to go for around five million euros ($6 million) when it is auctioned in June.

But with the art market booming, and prices for artists like Vincent Van Gogh rocketing, experts said it was hard to predict exactly when the bidding would stop.

The scene dates from the same period in 1882 when Van Gogh painted "View of the Sea at Scheveningen", which was stolen by the Italian Camorra organised crime syndicate from the Van Gogh Museum in Amsterdam in 2002 and discovered in Naples in 2016 thanks to a tip-off from a suspected drug trafficker.

The oil on paper, which belongs to a European collector, also graced the walls of the Van Gogh Museum for several years after being previously on show in Montreal.

Bruno Jaubert, of auction house Artcurial, said the work comes from very early in Van Gogh's career, when he was painting working-class people in his homeland.

"He had only started painting two years before," he told AFP.

Jaubert described the sale as an art market event, "with fewer and fewer Van Goghs coming to the market."

"Women Mending Nets in the Dunes" will be sold on June 4 along with five minor works by Van Gogh's friend Paul Gauguin.

One of them, a portrait of the artist's childhood friend Claude Antoine Charles Favre, is expected to go for between 180,000 and 250,000 euros.