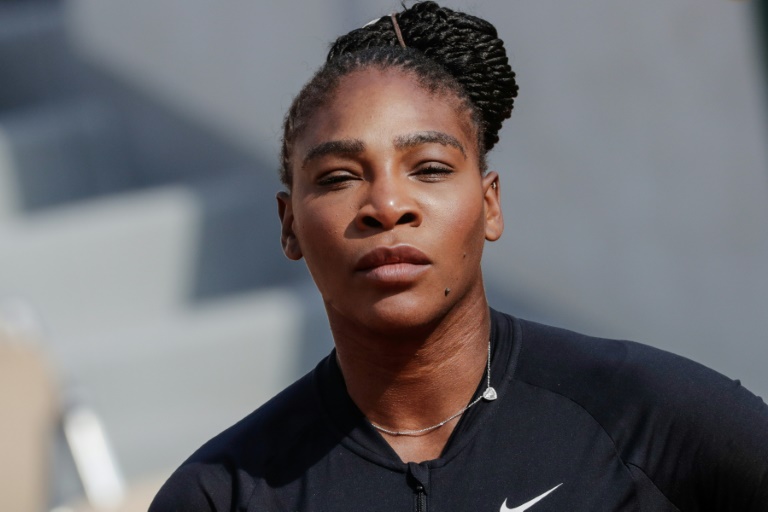 Look who's back: Three-time winner Serena Williams is playing her first Grand Slam tournament at the French Open for over a year (Photo: AFP)

Serena Williams and Victoria Azarenka are making their returns to Grand Slam tennis at the French Open, while world number one Simona Halep is bidding to finally win her first major title.

Here are five things to watch out for in the women's singles at Roland Garros ahead of the start of the tournament on Sunday:

Can Serena find her best?

-- Serena needs just one more Grand Slam title to equal Margaret Court's all-time record of 24, but hasn't played at one of the big four tournaments since the 2017 Australian Open. After returning to the tour following the birth of her daughter, the 36-year-old suffered early defeats to sister Venus and Naomi Osaka in Indian Wells and Miami respectively. But the greatest women's player of the modern era can never be counted out, and form anywhere near her best will make her a contender for a fourth Roland Garros triumph.

-- Halep suffered her third Grand Slam final loss earlier this year in the Australian Open to Caroline Wozniacki, but clay is the Romanian's favoured surface and this tournament represents her best chance of ending her wait for a major victory. The 26-year-old blew a 3-1 lead in the deciding set against Jelena Ostapenko in last year's final, having lost the 2014 showpiece in a similarly-tight clash with Maria Sharapova.

-- Azarenka, Sharapova and Serena Williams will be lining up in a Grand Slam together for the first time since the 2016 Australian Open. Belarusian Azarenka barely played last season after being embroiled in a custody battle, while Sharapova was not given a wildcard for the 2017 French Open after returning from a doping ban. Azarenka is an unseeded name the top-ranked players will be hoping to avoid for as long as possible, while two-time Roland Garros champion Sharapova is seeded at a Grand Slam for the first time since testing positive for meldonium over two years ago.

Young guns looking to take over

-- Defending champion Ostapenko returns as the fifth seed, having become the first unseeded woman to lift the trophy since 1933 as a 20-year-old 12 months ago. While much of the focus will again be on the more-established names, the big-hitting Latvian and fellow youngsters like Naomi Osaka and Daria Kasatkina could fly slightly under the radar. Osaka, also 20, claimed a stunning title at Indian Wells earlier this year and beat Serena in Miami. Russian Kasatkina, 21, could also provide a threat -- she lost to Osaka in the Indian Wells final and has risen to world number 14.

The fight for No. 1 spot

-- At Roland Garros, Wozniacki, Garbine Muguruza, Elina Svitolina, Karolina Pliskova and Caroline Garcia can all supplant Halep as world number one. Wozniacki will be guaranteed a return to No. 1 with a second successive Grand Slam title, while Spain's Muguruza will succeed Halep with a second French Open crown, as long as she doesn't face Wozniacki in the final. The chances for the other trio are more remote, as they have plenty of points to defend having all reached at least the last eight in 2017.