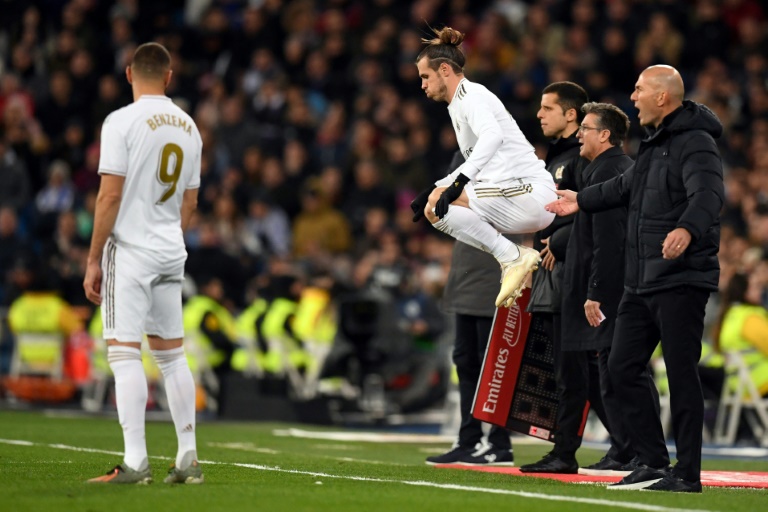 Bale was jeered when he came on as a substitute against Real Sociedad. (Photo: AFP)

Real Madrid and Barcelona continued to set the pace in La Liga, while managerless Bayern Munich closed the gap in Germany and Inter Milan kept the pressure on Serie A leaders Juventus.

Here, AFP Sport takes a look at five things we learned from European football over the weekend:

Bale future remains in the balance

Gareth Bale felt the full fury of the Santiago Bernabeu on Saturday as he came on to screeching whistles during Real Madrid's 3-1 win over Real Sociedad.

Madrid fans made their anger clear after Bale had celebrated Wales' victory over Hungary last week behind a banner that read: "Wales. Golf. Madrid. In that order."

It remains to be seen if Bale starts against Paris Saint-Germain in the Champions League on Tuesday but Zidane will have been pleased with another convincing win against Real Sociedad, who have enjoyed an excellent start to the season.

"He wants to be with us and do well and he's done that. Talk, talk, talk, it's not necessary. He's a big part of the group and we are together," Zidane insisted.

Real stay behind Barcelona on goal difference at the top of the table.

Antonio Conte believes that without Inter Milan, champions Juventus would already have one hand on a ninth consecutive Serie A title.

"Without Inter the championship would already be closed," said Conte, after his side stayed a point behind Juve with a 3-0 win at Torino.

Inter are seven points ahead of third-placed Lazio, with last year's runners-up Napoli down in seventh.

Inter are on a club-record unbeaten run of seven away games as they target their first league title since 2010, the year of their historic treble.

The 18-time Serie A champions have won 11 of their 13 games for their best start to a season since 1950-51, although that year they lost out on the title to AC Milan by just one point.

"We go forward with this positive mood that makes our chest swell... and provides even more stimulus," said the former Chelsea and Juventus coach.

Flick making his case at Bayern

Interim boss Hansi Flick has won all three of his games in charge of Bayern Munich since the sacking of Niko Kovac and admitted that he could stay in the role until the end of the season.

Flick, Joachim Loew's assistant coach when Germany won the 2014 World Cup, has been put in charge until the winter break starts on December 22, and saw his side beat Fortuna Duesseldorf 4-0 on Saturday.

"I can imagine many things, but that's still a long way off," Flick said about seeing out the season as caretaker manager after helping his side move to within one point of Bundesliga leaders Borussia Moenchengladbach.

"I enjoy working with the team, who are doing an excellent job."

Andre Villas-Boas is threatening to take Marseille into a full-blown revival after the only French club to have lifted the European Cup boosted their hopes of a return to the Champions League for the first time since 2013.

"We have to keep going like this," said Villas-Boas after a 2-0 win at Toulouse on Sunday.

Only five clubs have ever won Turkey's top flight, but the traditional 'big three' of Galatasaray, Fenerbahce and Besiktas are all struggling this season, leaving Sivasspor setting the pace.

Former Turkey international Riza Calimbay has seen his unfancied side embark on a run of five straight wins in all competitions, scoring 16 goals in the process, to lead Trabzonspor and Basaksehir Istanbul by two points at the summit.

Fans in Sivas, Turkey's 25th largest city, will be dreaming of seeing their team lift a maiden title next year, having finished runners-up once to Besiktas in 2009.

Sivasspor maintained their lead with a 4-1 victory at Kayserispor on Sunday.