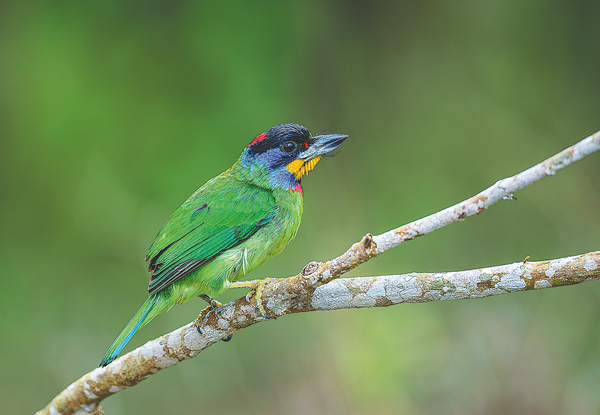 A black-browed barbet takes a well-deserved rest on a tree branch. (Photo provided to China Daily)

A hushed whisper quickly passed around Zhang Feng and his friends the moment a rare bird landed, in full bloom, right before their very eyes, or at least their telephoto lens. The event occurred during his recent trip to Ziyun village, Mingxi county, Fujian province.

Zhang's years of photographing birds had him quickly pinpoint its identity as Tragopan caboti, affectionately called "giant panda" by bird lovers for their rare numbers. Then, an intense staccato from the clicks of camera shutters arose, as Zhang and his photographer friends tried to capture the bird's exotic postures through their lens.

Ideal ecological conditions, with forest coverage exceeding 90 percent, gives Ziyun an appealing charm, especially for birds. The village has seen some 93 species of birds, which in turn draw ornithologists from across the country.

Ever since Ziyun launched bird sightseeing in 2016, people who share Zhang's interest in the feathered friends have taken to the village.