CULTURE Folau unrepentant and says content to walk away from rugby

Folau unrepentant and says content to walk away from rugby 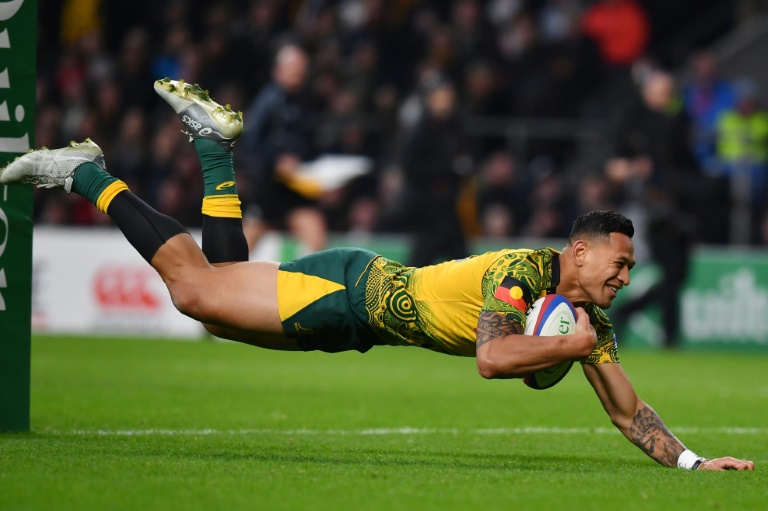 Unrepentant Wallabies star Israel Folau stood by his controversial anti-gay comments Sunday and said he was content to walk away from rugby with his faith in God taking priority.

The deeply religious 30-year-old caused a storm last week after posting on Instagram that "Hell awaits" homosexuals and other sinners. It sparked a fierce backlash and Rugby Australia said it planned to sack him.

The two sides met on Friday with the dual international, who started his career in rugby league, expected to go through a code of conduct hearing amid reports that he may have a legal case for religious discrimination.

"It's obviously a decision that's in the process right now but I believe in a God that's in control of all things," Folau told the Sydney Morning Herald newspaper at a Truth Of Jesus Christ Church service, in his first comments since the scandal exploded.

"Whatever His will is, whether that's to continue playing or not, I'm more than happy to do what He wants me to do."

Folau, Super Rugby's record try scorer, is Australia's most marketable player and was a key part of the Wallabies plans for the World Cup this year. But he has long riled those in power with his extreme views.

It remains online and has attracted more than 38,000 likes.

He was embroiled in a similar furore last year but escaped without sanction. However, with the Wallabies key sponsor Qantas livid at his latest comments, rugby bosses have taken a hard line.

Folau told the newspaper the outrage had not caused him to reconsider his stance.

"Absolutely not," he said. "I'll stand on what the Bible says. I share it with love. I can see the other side of the coin where people's reactions are the total opposite to how I'm sharing it.

"But in Ezekiel, chapter 33, verse 11, it says that 'God has no pleasure in the person that's living in sin' ... He's a loving God and he wants people to turn away from what they're living in and he'll give them life.

"That's the message that I'm trying to share, even though it comes across as harsh. I can't change what the word of God says."

With rugby league also turning its back on Folau, the supremely talented player faces his storied career coming to an end. He has already been stood down by the NSW Waratahs while his case is heard.

Folau admitted he would miss rugby, but said he was dedicated to God.

"First and foremost, I live for God now. Whatever He wants me to do, I believe His plans for me are better than whatever I can think. If that's not to continue on playing, so be it," he said.

"In saying that, obviously I love playing footy and if it goes down that path I'll definitely miss it. But my faith in Jesus Christ is what comes first."

Despite widespread condemnation of his views, he won support in some quarters, notably from England and Saracens No 8 Billy Vunipola, who like Folau is of Tongan heritage and liked his post on Instagram.

Vunipola, who faces a grilling by Rugby Football Union chiefs, was booed every time he touched the ball in the Saracens Premiership loss to Bristol on Saturday.

Folau said it was "a tough time" for him but "I have love towards everyone that might be saying negative things".