CULTURE Food, music and life: Enjoying everything that Kazakhstan has to offer

Food, music and life: Enjoying everything that Kazakhstan has to offer 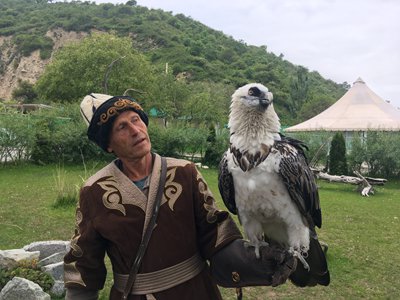 Kazakhstan has increasingly opened to the world since the Belt and Road initiative was proposed in 2013 by Chinese President Xi Jinping during a visit to the capital of Astana. Although tourism is not a pillar of Kazakhstan's economy, investment from China and other countries has recently helped bring tourists to the country. Increased direct flights and relaxed visa rules are some of the changes that have been implemented to further attract tourists to the country, said Roman Vassilenko, deputy minister of Foreign Affairs of Kazakhstan.Traveling in the world's ninth-largest country offers a unique mixture of both Asian and European cultures that should not be missed.
CuisineRecently, my friends and I went on a trip to the country, during which time we were fortunate enough to enjoy a traditional Kazakh dinner, which our host kicked off with a cryptic toast. "Our honorable guests will take the eyes, meaning that you will always keep an eye on our country," said the host Satybaldy. He was not speaking figuratively. Sheep eyes are a delicacy in Kazakhstan. As a Chinese, I'm not put off by the thought of eating a sheep head, eyeballs were something new for me. It had a rubbery texture, but with a surprising savory mutton flavor. Another unexpected part of our meal was camel's milk. Besides its oil fields, the country's Mangistau region is also known for camel ranching. As such a drive through the area is filled with opportunities to see camels grazing."We leave camels in the grassy areas of the Gobi to graze. A week later, we come and get them back," said Zhibek, our guide during a visit to the region's city of Aktau. The camels do not run away, but sheep are a different story, Zhibek explained. Farmers lead sheep to the grasslands in the morning and retrieve them in the evening, she noted.Horse meat is also popular in the country. In particular, Qazy, which is a horse-meat sausage that is served boiled, smoked, dried as well as other ways. However, the most famous of Kazakh delicacies is sturgeon caviar, which is popular among tourists to Aktau, said Karimbayev Abdikarim, assistant director of fishery Kazakh Osseter. The Caspian Sea is the home base for the country's lucrative sturgeon farming industry. Caviar sells for $700 a kilogram locally and much more overseas. Sturgeon meat, however, sells for $8 per kilogram. It has very few bones, which makes it great for people who enjoy eating fish but hate spending time picking out fish bones.

Natural vistasEncompassing more than 2.7 million square kilometers of land and two time zones, Kazakhstan is home to rich natural reserves. If you're looking for snowy scenery during the summer, look no further than Big Almaty Lake. At 2,510 meters above sea level, the lake is a highlight of the Ile Alatau Mountains. Due to the altitude, water temperatures stay below 8 C in summer. However, the lake is protected, so swimming is not allowed. As tourism is still developing in Kazakhstan, many of its natural features still remain in their original state and are well-preserved. Charyn Canyon, about 220 kilometers east of Almaty, is another attraction that is worth seeing. The canyon, near the border of China, is about 90 kilometers long and offers dramatic views.

Museums Kazakhstan gained independence in 1991, yet its people's history and culture dates back thousands of years - and there is no shortage of museums in the country showcasing this fact.The National Museum of Kazakhstan in Astana opened in 2014. The museum covers an area of 74,000 square meters and exhibits items from ancient to modern times.A must-see exhibit is the "Golden Man" of Kazakhstan. Discovered in 1969 about 90 kilometers from Almaty in a burial mound, archaeologists spent two years excavating what was determined to be the remains of an 18-year-old Scythian warrior covered in 4,000 gold ornaments. It is a national treasure. Despite being called Golden Man, the sex of the skeleton remains unidentified. Kazakhstan also has a rich musical heritage. One of the most famous Kazakh instruments is the dombra. The two-stringed lute-like instrument is noted for its long neck. It is strongly associated with local minstrel traditions.The Republican Museum of Folk Instruments in Almaty opened in 1980. The museum is named after Kuishi Yklas, a renowned master of the kobyz, a traditional bowed instrument. The site of the museum is a former officer's house built in 1908. It contains more than 1,000 exhibits that include over 60 kinds of Kazakh folk musical instruments used by famous musicians, poets and composers. Visitors to the museum can not only enjoy videos of classical Kazakh music, but also small concerts featuring the instruments.

But what impressed me most was the Orteke puppetry performance. The traditional art involves a dombra player that sings while manipulating a wooden puppet shaped like a mountain goat. The puppets, controlled with strings and foot pedals, jump straight up and down on a traditional drum called a daulpaz, creating an accompanying rhythm.

FalconryIn ancient times, nomadic Kazakhs raised falcons for hunting. Nowadays, falconry demonstrations are a popular draw for tourists. Sunkar is a famous falconry center in Almaty. Established in 1989 in Ile Alatau National Park, the Sunkar has operated as a breeding center for over 25 years. The nursery has so far bred thousands of saker falcons, 500 of which have been released into the wild, according to the local tourist office. The birds are born in captivity, so it's up to the breeders teach them how to fly and hunt, said Paul, one of Sunkar's breeders. Once released into the wild, the falcons sometimes fly back to the nursery to make "guest appearances" at their demonstrations, said Paul. Some of the falcons are also sold to breeders and falconry enthusiasts, he added.