CULTURE For some whales, sonar may provoke suicidal behaviour: study

For some whales, sonar may provoke suicidal behaviour: study 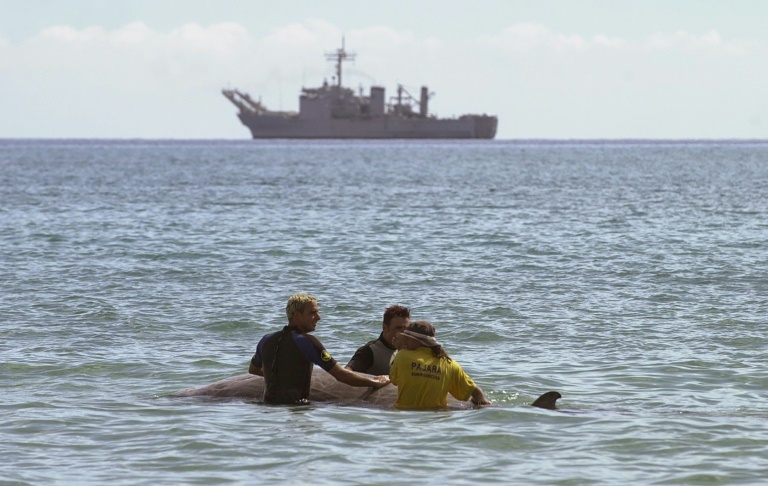 Beaked whales get stressed by sonar and can suffer decompression like scuba divers, according to researchers. (Photo: AFP)

Scientists have long known that some beaked whales beach themselves and die in agony after exposure to naval sonar, and now they know why: the giant sea mammals suffer decompression sickness, just like scuba divers.

At first blush, the explanation laid out Wednesday by 21 experts in the Royal Society journal Proceedings B seems implausible.

Millions of years of evolution have turned whales into perfectly calibrated diving machines that plunge kilometres (miles) below the surface for hours at a stretch, foraging for food in the inky depths.

So how could the ocean's most accomplished deep-sea diver wind up with nitrogen bubbles poisoning its veins, like a scuba novice rising too quickly to the surface?

"In the presence of sonar they are stressed and swim vigorously away from the sound source, changing their diving pattern," lead author Yara Bernaldo de Quiros, a researcher at the Institute of Animal Health at the University of Las Palmas de Gran Canaria, Spain, told AFP.

"The stress response, in other words, overrides the diving response, which makes the animals accumulate nitrogen," she added. "It's like an adrenalin shot."

One type of sonar in particular throws these whales off balance.

Developed in the 1950s to detect submarines, mid-frequency active sonar (MFAS) is used today in naval patrols and exercises, especially by the United States and its NATO allies.

Starting around 1960, ships began emitting underwater signals in a range of about 5 kilohertz (kHz).

That is when the mass beaching of beaked whales, especially in the Mediterranean, began.

Between 1960 and 2004, 121 of these so-called "atypical" mass strandings took place, with at least 40 closely linked in time and place with naval activities.

hese were not individual strandings of old or sick animals, nor en masse strandings such the one last November in New Zealand, when more than 200 pilot whales beached themselves together.

Rather, a handful or more beaked whales would wash ashore within a day or two, and no more than few dozen kilometres apart.

The most deadly episode, in 2002, saw 14 stranded over a 36-hour period in the Canary Islands during a NATO naval exercise.

"Within a few hours of the sonar being deployed, the animals started showing up on the beach," Bernaldo de Quiros said.

Outwardly, the whales showed no signs of disease or damage: they had normal body weight, and no skin lesions or infections.

Internally, it was another story. Nitrogen gas bubbles filled the veins, and their brains were ravaged by haemorrhaging.

Autopsies also revealed damage to other organs, as well as to the spinal cord and central nervous system.

As with altitude sickness, reactions -- in humans, and probably in whales -- to nitrogen bubbles in the blood vary in type and intensity.

A 2003 study in Nature on the possible link between sonar and whale deaths led to Spain banning such naval exercises around the Canary Islands in 2004.

"Up until then, the Canaries were a hotspot for this kind of 'atypical' strandings," said Bernaldo de Quiros. "Since the moratorium, none have occurred."

The authors called for similar bans to be extended to other regions where at-risk whales are known to congregate.

The Cuvier's grows up to seven metres (23 feet) and dines mainly on deep-water squid and fish. Its upwardly turned mouth gives the impression of a permanent smile.

The whale is listed as "vulnerable" on the IUCN Red List of endangered species, and is thought to have a global population of 5,000 to 7,000.