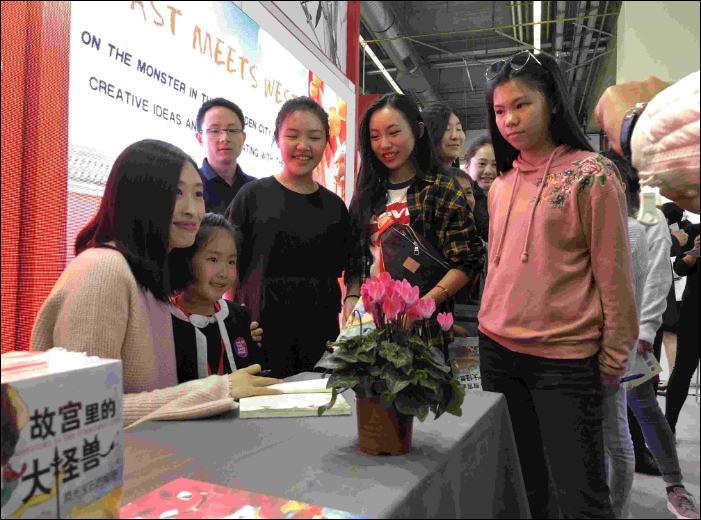 "I want to write something that has 'Chinese taste'," said Chang Yi, author of China's first Forbidden City-themed children's book series Monsters in the Forbidden City.

She has just come back to Beijing from the Frankfurt Book Fair, the world's largest, where her monster story was introduced to publishers across the world and acquired German copyrights.

Before this overseas promotion, the set of nine books was already hugely popular in China, selling nearly two million copies in the past four years, and had already acquired copyrights in seven countries and regions, including Arabic-speaking regions, Thailand, Korea, Malaysia, Mongolia, and the Hong Kong Special Administrative Region.

"I was surprised that a story rooted in traditional Chinese culture is warmly welcomed overseas," said Chang.

Published in 2015, the book series is centered around a girl's adventure in the Forbidden City, where she encounters monsters that live in and guard the royal palace of Ming (1368-1644) and Qing (1644-1911) Dynasties.

The monsters are not created by the author; on the contrary, they are depicted in China's ancient books, such as Shiji (Records of the Grand Historian), Chunqiu (Spring and Autumn Annals), and Soushen Ji (The Search of the Sacred), to name just a few.

They all have magic powers. Monster Xingshi is god of thunder, so ancient Chinese people put its figure on the cornice of wooden buildings to prevent lightning strikes; the monster Jiaotu can keep enemies outside of the door, so its figure appears on doors to guarantee safety. Monsters' figures can be seen everywhere in the Forbidden City, as emperors of the time believe they can bring peace to the palace.

"China's monster culture is one that has the longest history among other monster cultures in the world, but few know about it," said Chang, "It was such a pity, because I grew up with monsters' stories and they are so dear to me."

Chang, a Beijing native, frequented the Forbidden City in her childhood. Many of her neighbors are retired working staff from the Forbidden City, and they told her many stories about the palace, especially those about monsters.

"Chinese call good monsters 'holy monsters' or 'lucky monsters'. They have a monster appearance but have holy spirit or human spirit, which is different from animal monsters in Western culture," said Chang, "They are closer to humans and have more interactions with human."

After Chang grew up and became a mother, she had the desire to tell her child the stories she had heard growing up. So she wrote monster stories, and put her own understanding of the Chinese aesthetic taste in them.

Now her monster stories are shared by Chinese children at large, and many take the books as guides to look for monsters in the Forbidden City.

Seeing the phenomenon, Chang is happy. "I hope they can know the monsters that I know, their stories and their specialties," said Chang. “Maybe they are willing to know more about Chinese historical culture in the future."