Foreigners on front lines of pandemic in Gulf Arab states 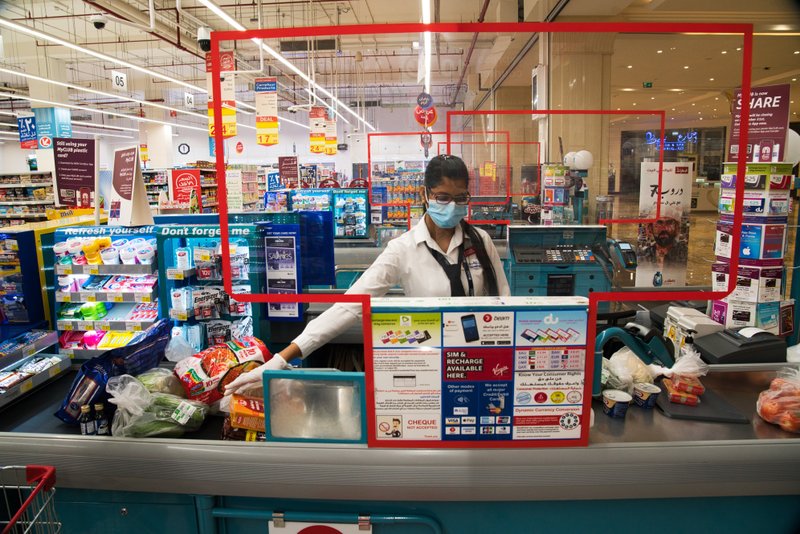 In this April 19, 2020 photo, cashier Valancy Fernandes of India, wearing a surgical mask and gloves to help prevent the spread of coronavirus, works at a Carrefour supermarket in Dubai, United Arab Emirates. Frontline workers across Arab Gulf countries are uniquely almost entirely foreigners. They risk exposure to the novel coronavirus, ensuring patients are cared for, streets are sanitized, packages are delivered and grocery stores are stocked. The global pandemic has drawn attention to just how vital foreigners are to the Arab Gulf countries where they work. (Photo: AP)

As she was treated for COVID-19 in a hospital isolation ward in Kuwait City, Amnah Ibraheem wanted to credit those caring for her. The nurses were all South Asian, the radiologist was African, another of her doctors was Egyptian. The only fellow Kuwaiti she saw, briefly, was a lone volunteer.

Ibraheem pointed this out on Twitter, in a rejoinder to some voices in Kuwait and other parts of the Gulf who have stoked fear and resentment of foreigners, blaming them for the spread of the coronavirus.

“We can’t decide right now to be racist and to say that expats are free-riders, because they’re not,” the 32-year-old political scientist and mother of two told The Associated Press. “They’re the ones working on our health right now, completely holding our health system together.”

The global pandemic has drawn attention to just how vital foreigners are to the Gulf Arab countries where they work, particularly as countries like Saudi Arabia, Kuwait and Oman expel foreigners from certain sectors to create jobs for their own citizens. The crisis has also shed a brief light on the systemic inequality in their home countries that drives so many to the region in the first place.

Across the Gulf countries, the workers on the front lines are uniquely almost entirely foreigners, whether it’s in a hospital in Saudi Arabia, an isolation ward in Kuwait or a grocery store in the United Arab Emirates. They carry out the essential work, risking exposure to the novel coronavirus, often with the added strain of being far from family.

In the UAE, Qatar, Kuwait and Bahrain, foreigners also make up the vast majority of the population. Most hail from India, Pakistan, Nepal, the Philippines and Egypt. They reside on temporary work visas with no path to citizenship, no matter how long they’ve lived or worked in the Gulf. Many work low-paying construction jobs and live in labor camps where up to 10 people share a room. These living conditions have made them vulnerable to the fast-spreading disease known as COVID-19.

That has made them a target for some. Popular Kuwaiti actress Hayat al-Fahad told a Kuwaiti broadcaster the root of the country’s coronavirus problem lies in South Asian and Egyptian migrant workers. She lamented that if their own countries won’t take them back, why should Kuwait fill its hospitals to treat them at the expense of its own citizens.

“Aren’t people supposed to leave during crises?” she said, before adding: “I swear by God, put them in the desert. I am not against humane treatment, but we have gotten to a point where we’re fed up already.”

Ibraheem said her tweet was in response to such rhetoric. Kuwait, she said, has always been a moderate, welcoming country built with help from expatriates.

From the same hospital, Najeeba Hayat used Instagram to take aim at Kuwaiti lawmaker Saffa al-Hashem after she called for the deportation of foreigners who’d overstayed their visas in order to “purify the country” of the virus they might transmit.

“I take umbrage to that,” Hayat told the AP. “There’s no way we can survive if we continue to look down on the very people taking care of us, who have raised our children, who are part of the fabric of our community.”

Hayat spent more than 30 days in the hospital until she was cleared of COVID-19. On the day she left, she shared photos with her more than 25,000 followers of her Indian nurses, thanking them for being on the front line with her.

While foreign doctors and nurses have received some praise in local media, farther from the spotlight are the delivery men, street cleaners, construction workers, butchers and cashiers who also risk exposure to the virus in their jobs.

At the Carrefour supermarket in Dubai, plexiglass shields at the registers protect the cashiers, and everyone entering is required to wear gloves and a mask.

One cashier, Valaney Fernandes, a 27-year-old from Goa, India, who’s been working in the UAE the past five years, said she felt she was contributing. “It’s like in hospitals and everywhere, they are serving there as much as they can.”

Fernandes said she was grateful to still be working. Her retired parents back home rely on her salary. “We have to earn for our daily needs,” she said. “I’m lucky enough to work now. I’m really lucky.”

Tens of thousands of migrant workers who’ve lost their jobs have demanded from their embassies in the Gulf to be flown back home amid the pandemic. In the UAE alone, local media reported that more than 197,000 Indians registered their details with the Indian government to return home.

When the UAE shuttered movie theaters in March, Ugandan Lukia Namitala came close to losing her job at Vox Cinema, but parent company Majid Al Futtaim quickly redeployed her and some 1,000 other employees to their Carrefour supermarket division to help with a surge in demand.

“The majority of my friends, they are no longer working,” she said. Now she’s an essential worker, stocking shelves.

To be so far from family has been hard, she said. Namitala had to postpone her annual leave last month due to the pandemic, and missed her daughter’s fifth birthday. As she thought about another missed milestone, her eyes welled up with tears.

“The best thing in this world is staying next to your family,” she said. “If I get my savings nicely, I’m ready to go back and stay with my family because my family is my everything.”

In a nod to how important foreigners are to the economy, Abu Dhabi Crown Prince Mohammed bin Zayed said in a video he was moved to tears watching foreign residents on social media sing the UAE’s national anthem.

“May God protect you, protect the country you’re in, which you are loyal to like its own citizens,” he said in late March.