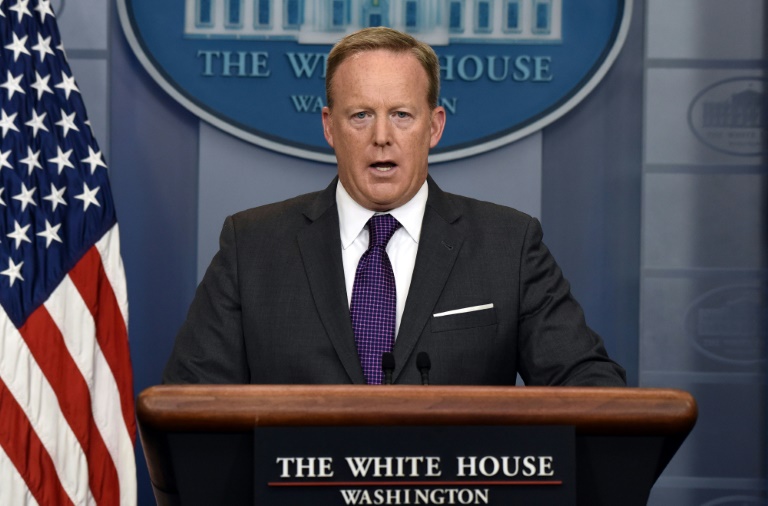 Sean Spicer received poor reviews during his brief stint as White House spokesman and his new memoir, "The Briefing," which hits bookstores on Tuesday, is not faring much better.

"Mr. Spicer's book is much like his tenure as press secretary: short, littered with inaccuracies and offering up one consistent theme: Mr. Trump can do no wrong," ABC News White House correspondent Jonathan Karl said in a review for The Wall Street Journal.

Spicer got off to a rocky start as press secretary by defending President Donald Trump's patently false claim that the size of the crowd at his inauguration was larger than that of president Barack Obama's.

"This was the largest audience to ever witness an inauguration, period, both in person and around the globe," Spicer thundered in his first appearance at the White House podium.

Spicer then stormed off and refused to take any questions from the White House press corps.

Trump was not pleased with his performance, Spicer says in the book, and things went downhill from there, resulting in his departure after just six months in the White House.

"I had made a bad first impression, and looking back, that was the beginning of the end," Spicer writes.

The Wall Street Journal described it as the beginning of the "tenure as one of the most widely scorned press secretaries in history."

If the book is an attempt by Spicer to rehabilitate his reputation and to elevate that of Trump, the first reviewers tend to think that he missed the mark.

"Twisting language into the incomprehensible -- and meaningless -- was a special talent of Spicer the press secretary and also clearly of Spicer the memoirist," The Washington Post said.

"'The Briefing' isn't a political memoir, nor is it a work of recent history, nor a tell-all, or tell-anything," it said.

"Rather, it is a bumbling effort at gaslighting Americans into doubting what they have seen with their own eyes as far back as June 2015, when Trump announced his candidacy and labeled Mexican immigrants as rapists, beginning a pattern of racist attacks."

National Public Radio said Spicer makes some valid points in his book about Washington politics but "leaves out important context and doubles down on some of the lies he became famous for as press secretary."

"Spicer has already made his bed -- it's a shame he continues to lie in it," NPR said.

At least one reviewer did rave about the book.

"A friend of mine and a man who has truly seen politics and life as few others ever will, Sean Spicer, has written a great new book," Trump tweeted.

"It is a story told with both heart and knowledge. Really good, go get it!"