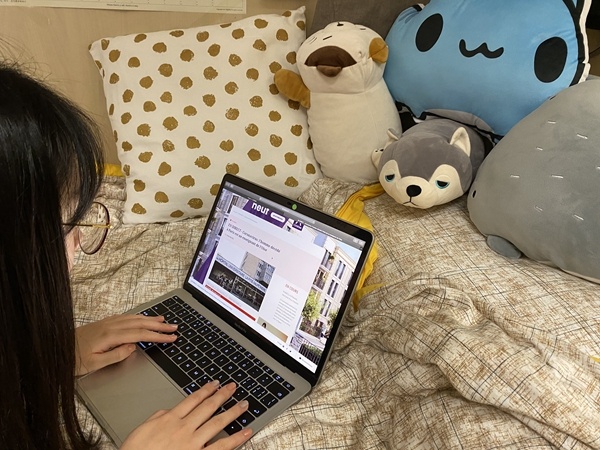 Sarah, who is now studying in high school in Singapore, leads the French language group of the website, 2019ncptoday, an international news aggregation service for domestic readers, set up by a group of Chinese high schoolers. (Photo provided to China Daily)

A group of young students have launched a website that aggregates and translates international news articles about the outbreak for domestic readers, Li Yingxue reports.

Since late January, a group of high school students, like the rest of their peers, haven't left their homes in a bid to contain the spread of the novel coronavirus, but they have found a meaningful way of bringing the outside world closer.

Engaging in a project to run the website, 2019ncptoday, they are providing an international news aggregation service for domestic readers. The team members, known by their internet names such as Tracey, Mo, Sarah, Alice, and Tiaotiaogu, are Chinese high school students, who are based in various cities across China, as well as in other countries, such as Singapore.

During the unusually long winter vacation, as the outbreak has been spreading globally, Tracey noticed it's not enough for her to just read virus-related news in China. Although there has been international news in the media, she still wanted to know more about what's going on in the world.

The project was initiated by Tracey, when one day she asked herself: "Why not translate the news from foreign countries into Chinese, so that we can know what they think of us, and how each country is dealing with the virus?" That sparked the idea to collect news in other languages and translate it into Chinese.

"Additionally, this news might also be useful for Chinese people who have recently been, or are planning on, traveling to other countries for holidays or business trips," Tracey says in an interview with China Daily. All the members interviewed prefer to use their internet names.

On Feb 7, she set up the website with her translations and abstractions of some English and Spanish news stories, and she asked friends and classmates to join her on her WeChat moments. Soon a five-member team, aged between 16 and 18 years old, came into being.

Things snowballed from there. As the website garnered more readers, volunteers from both home and abroad were keen to join the team. Now the website has input from more than 30 volunteers who have translated over 200 articles from 10 languages, including English, German, French, Japanese and Italian.

"We form 10 groups for 10 languages, and we are also trying to add more language categories to our website," she says, adding that each language group has several volunteer translators who are high school or college students, and one or two professional editors or people who have lived abroad for years.

The editors would go through both the original news and the Chinese abstraction to make sure there is no missing information or any mistakes in the translation.

"We will check the facts, discuss the wording and logic of the news, as well as all the details. Even though it takes time to go back and forth, it's a necessary process," Tracey says, adding that she often found flaws in coronavirus-related news translated by some Chinese media platforms.

She is responsible for the final check to make sure all the information, such as the translator's name, the original link and the source of the photos are correct before she uploads the article online.

The news they translate and abstract covers the coronavirus situation, the development of a vaccine and interviews with medical staff.

"We have three rules to select the news: It has to have been published by a renowned media source, objective reporting only-we won't take any opinion pieces-and the third rule is that the news has to be valuable, especially from some angles that Chinese media may not cover," she says. "Our goal is to provide domestic readers an international view."