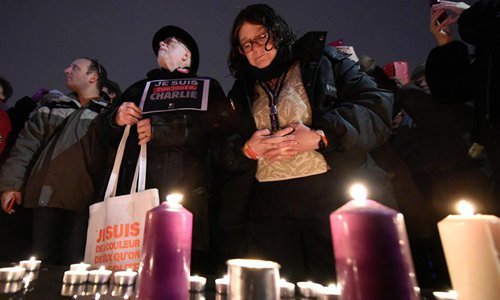 People commemorate victims of the terrorist attack against Charlie Hebdo in 2015 during a commemoration at the Place of the Republic in Paris, France, on Jan. 7, 2016.(Photo: Xinhua)

French authorities said Tuesday they would close a Paris mosque in a clampdown on radical Islam that has yielded over a dozen arrests following the beheading of a teacher who had shown his pupils cartoons of the Prophet Muhammad.

The mosque in a densely-populated suburb northeast of Paris had published a video on its Facebook page days before Friday's gruesome murder, railing against teacher Samuel Paty's choice of material for a class discussion on freedom of expression, said a source close to the investigation.

The interior ministry said the mosque in Pantin, which has some 1,500 worshippers, would be shut on Wednesday night for six months.

Interior Minister Gerald Darmanin has vowed there would be "not a minute's respite for enemies of the Republic." The order came after police on Monday launched a series of raids targeting Islamist networks.

Paty, 47, was attacked on his way home from the junior high school where he taught in Conflans-Sainte-Honorine.

A photo of the teacher and a message confessing to his murder was found on the cellphone of his killer, 18-year-old Chechen Abdullakh Anzorov, who also posted images of the decapitated body on Twitter.

Anzorov was shot dead by police.

Education Minister Jean-Michel Blanquer said Tuesday that Paty would be posthumously bestowed France's highest order of merit, the Legion of Honour, for having been "martyred" because of his profession.