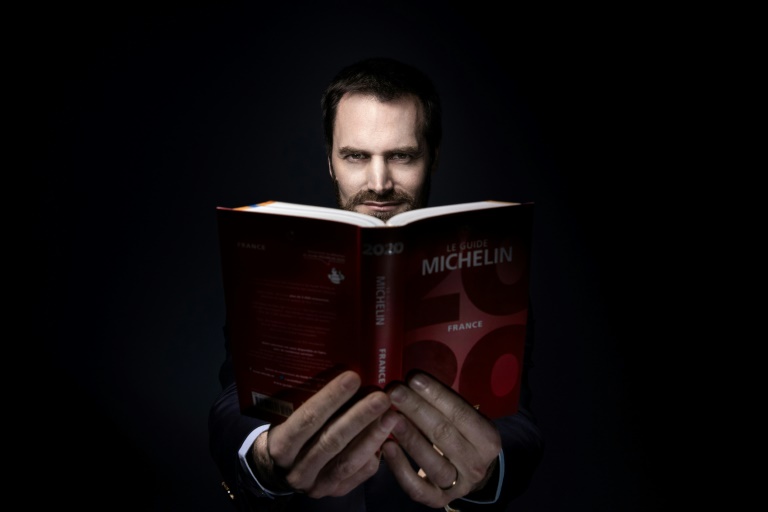 Gwendal Poullenec, director of the Michelin Guide, insists stars are not 'inherited' but must be 'earned every year'. (Photo: AFP)

It is the annual event that has accomplished chefs quaking in their toques: Monday's 2020 edition of the Michelin restaurant guide for France reveals the winners and losers of its coveted rating stars.

This year's edition of the so-called gastronomy "bible" caused a stir even before its official release when it was revealed Michelin has stripped renowned chef Paul Bocuse's flagship restaurant of one of its three stars.

The red guide, which can make or break culinary reputations, angered many in the industry by downgrading the iconic Auberge du Pont de Collonges -- the oldest three-starred restaurant in the world created by Bocuse, nicknamed the "pope" of French cuisine.

But Michelin boss Gwendal Poullennec defended the move by insisting stars are not "inherited", and "must be earned every year".

"We obviously understand the emotion that the loss of a star can provoke, but there is no exceptional treatment," he told AFP.

"All establishments are evaluated anonymously by our inspectors every year... whether you are an iconic chef or a young chef who takes the risk of being plunged into debt by opening a restaurant."

Poullennec told AFP no other three-starred restaurants ran the risk of being downgraded in this year's guide.

According to Michelin, restaurants are selected on four criteria: the quality of the ingredients used, mastery of flavour and cooking techniques, the personality of the chef reflected in their cuisine, and lastly value for money and consistency between visits.

Of 30,000 restaurants listed worldwide, only about 130 have attained the highest distinction.

Critics say the process has rendered Michelin stars untenable as more and more diners balk at spending a fortune on a meal.

A handful of French restaurateurs have in recent years relinquished their prized three-star status because of the stress of being judged by Michelin inspectors.

The 2003 suicide of three-star chef Bernard Loiseau was linked, among other reasons, to speculation that his restaurant was about to lose its three-star status.

Veyrat sued the guide for suggesting -- wrongly, he insists -- that he had used cheddar cheese in a souffle.

His lawsuit was rejected.

- From France to Japan -

The guide was born in a very different guise, when brothers Andre and Edouard Michelin, founders of the eponymous tyre company, brought out a travel guide in 1900 to encourage motorists to take to the road and so boost business.

There were fewer than 3,000 cars in France at the time.

Initially free, the red guidebook included maps, a how-to on changing tyres and lists of petrol stops, mechanics, hotels and eateries along the route.

The first run of 35,000 copies was such a success that guides for Belgium, Germany, Portugal, and Spain followed.

The three-star ranking for restaurants was introduced in 1931.

In 2005, the Michelin Guide branched out of Europe with a New York guide, followed in 2007 by editions for San Francisco then Las Vegas and Los Angeles.

More than 30 million Michelin Guides have been sold, according to its website.