Rife with drugs and weapons, the Cité Gély in the southern French city of Montpellier is a known hub for trafficking. 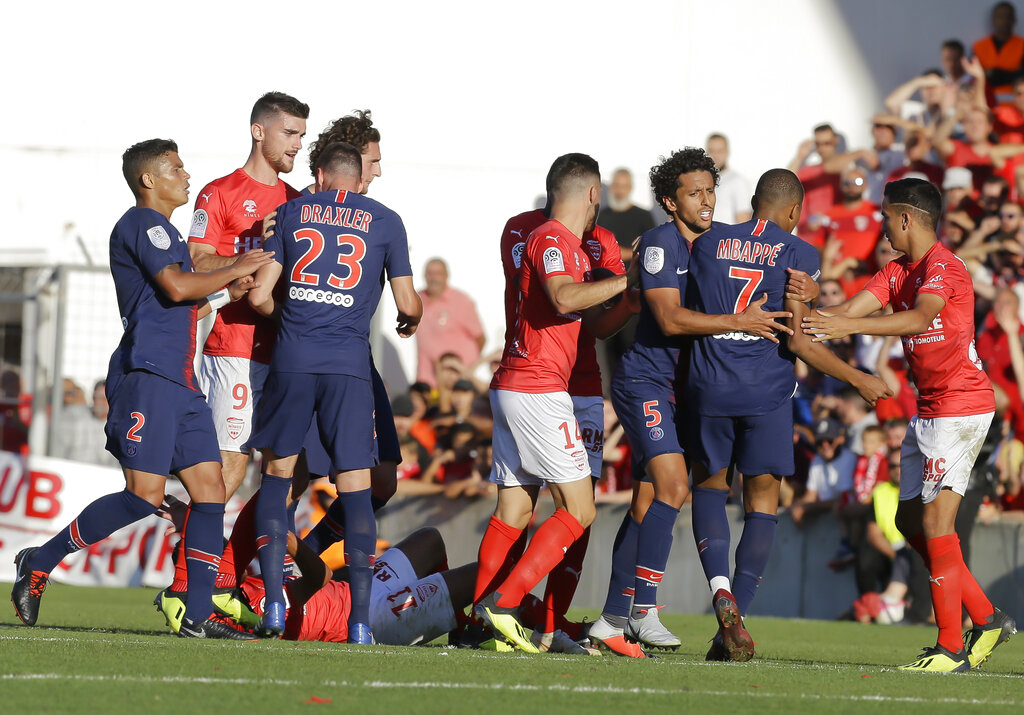 In this Sept. 1, 2018 file photo PSG's Kylian Mbappe, 2nd right, argues as Nimes' Teji Savanier, left, lies on the pitch during their League One soccer match between Nimes and Paris Saint-Germain at Jean-Bouin stadium in Nimes, southern France. (Photo: AP)

The housing project where big expensive black cars share the streets with groups of youngsters riding their motorbikes without helmets is also home to one of France's most exciting players in the French league.

Teji Savanier, the league's top assist provider learned his superb passing and dribbles skills in the neighborhood, where he still lives with his family of gypsy descent.

"This is where I feel the best on earth," the Nîmes playmaker recently told sports daily L'Equipe. "Nothing can happen to me there. I was born there, I will die there."

Despite the one-hour commute between Montpellier and Nîmes, Savanier never thought about leaving his community when he signed for the Crocodiles in 2015.

"When I make it to the estate, I feel cool and rested," he said. "We are between gypsies. We play pétanque (the bowls sport very popular in France) in the afternoon. The loser goes to the butcher shop to buy meat for the barbecue, then in the evening we play guitar outside. I don't think there are many professional football players who are lucky enough to live this life."

Savanier started at Palavas, a small club on the Mediterranean coastline, and was spotted by Montpellier when he was 14 years old. He joined his hometown team's academy and won the 2009 Gambardella Cup, the national competition for under 19s. But with a crop of players including the likes of Remy Cabella and Younes Belhanda, competition was fierce at Montpellier and Savanier was not kept by the club.

After a short stint at Arles, he fully blossomed in Nîmes and helped the club to promotion in the top division last season with four goals and nine assists. But he made headlines for the wrong reasons in September following an altercation with Paris Saint-Germain star Kylian Mbappé that resulted in a five-match ban. Mbappe got a three-game ban.

"I'm a Gipsy, a Mediterranean, I'm quite hot-tempered," he said. "It's good to have character, but you also have to channel it, and I'm sometimes too explosive. When I play, I feel this inner flame, but I'm not a thug."

Savanier has since made amends in a superb fashion. With 12 assists and six goals in 30 matches, he has been a leader by example and has largely contributed to Nimes' consistent season. With his faultless eye for set-pieces — nine of his assists came from corner or free kicks — he's ensured Nimes will remain in the top-flight with three rounds left.

"I love Savanier," former France international Luis Fernandez says. "Technically, everything he does is perfect."

A late bloomer, the 27-year-old player is under contract with Nimes to 2022. But he might be forced to change the lifestyle he loves so much well before that deadline. His impressive world-class passing has not gone unnoticed and clubs in and outside France have reportedly expressed their interest in signing the diminutive playmaker.

Savanier says he is ready for a move because his kids and wife could travel with him and could help him move away from the delights of Cité Gély.

"When I was younger it was more difficult, I did not have them," he said. "With a wife and kids, you can go anywhere. I know that I will be happy with them. And my main objective in life is to keep the three of them comfortable."