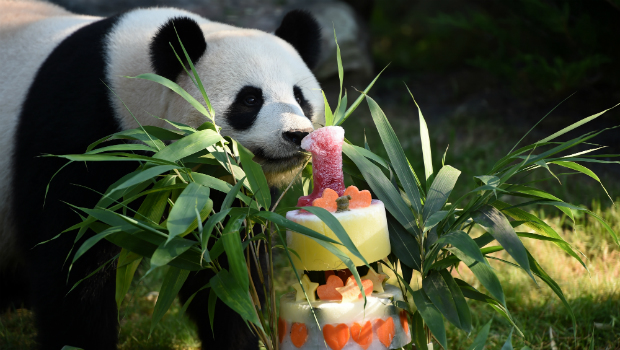 Panda Huan Huan samples the birthday cake of her cub Yuan Meng inside their enclosure at The Beauval Zoo in Saint-Aignan-sur-Cher, central France on August 4, 2018. (Photo: Guillaume Souvant/AFP)

Cake, posters, mascots and even books and CDs on the one-year-old male cub are offered to hundreds of fans who have been queuing for long minutes in hope to catch a glimpse of the chubby bear.

The ceremony started at around 9:15 local time (0715 GMT) when Yuan Meng, accompanied by two caretakers, entered the outdoor enclosure to discover "special baby panda", a glace birthday cake made of honey, fruits and bamboo which did not immediatly arouse its appetite. A member of staff carries panda cub Yuan Meng towards his birthday cake inside his enclosure at The Beauval Zoo in Saint-Aignan-sur-Cher, central France, on August 4, 2018. (Photo: Guillaume Souvant/AFP)

At first, the panda cub preferred to play with his mother before tasting the cake while visitors used their phones to record every move of the ceremony's star.

"I know there are live footage on TV, but I prefered coming and see Yuan Meng with my own eyes. I have already visited the giant pandas several times before. Yuan Meng has grown well and it is very beautiful and cute, I took a lot of photos," a visitor who gave her name as Bourreau told Xinhua while enjoying the cake with her husband.

On Aug. 4, 2017, giant panda Huan Huan gave birth to twin cubs, the first panda babies born in France. The first cub died shortly after its birth and the second one was named in last December as Yuan Meng, meaning "the realization of a dream" in Chinese.

Yuan Meng has grown from only 143 grams at birth to 30 kilograms currently, and is doing very well physically, according to Rodolphe Delord, the zoo's general director.

"It continues to suckle its mother and eats bamboo regularly. it suckles a lot and plays a lot, it is adorable," he said.

The parents of Yuan Meng, Huan Huan and Yuan Zi, arrived in France in January 2012 on a 10-year loan from China.

Since the couple's arrival, the number of visitors to the Beauval Zoo has doubled, and reached 1.5 million in 2017. "In 2018, we are expecting more than 1.5 million visitors, who come to see the evolution of Yuan Meng, which allows us to increase our public awareness of major biodiversity programs," Delord said.

There are about 2,000 giant pandas in the world. They are classified as a vulnerable species by the International Union for Conservation of Nature (IUCN).