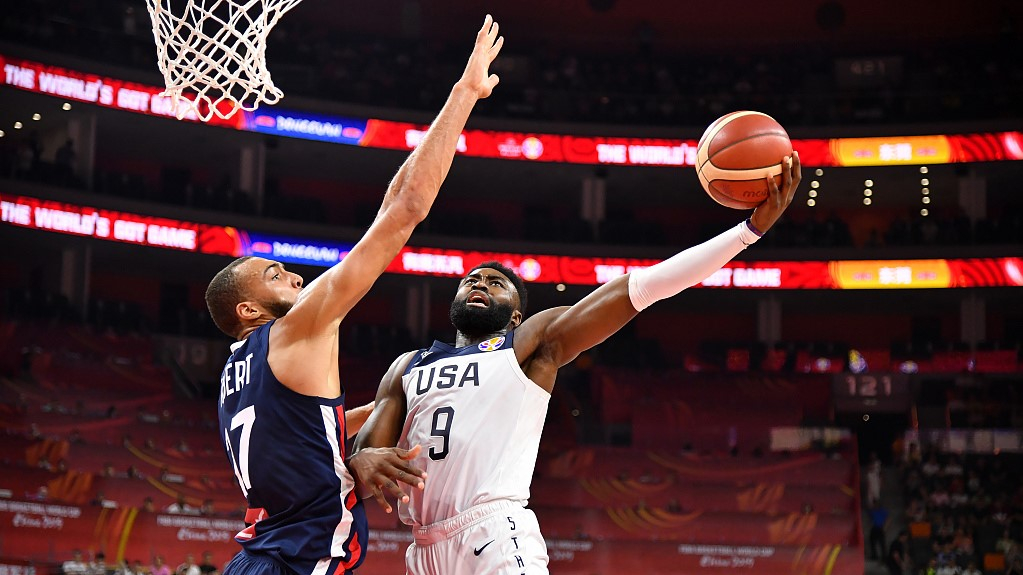 DONGGUAN, China, Sept. 11 (Xinhua) -- A 17-4 run in the fourth quarter inspired France to a stunning 89-79 victory over defending champions USA in the quarterfinal of FIBA Basketball World Cup here on Wednesday, setting up a semifinal clash with Argentina.

The game seesawed during the first third quarters and the U.S. led 66-63 into the fourth quarter. Harrison Barnes scored four points and Kemba Walker added a jump-shot to lift the U.S. a 72-65 lead, forcing France to call a timeout. France stormed to a 17-4 spurt and regained an 82-76 lead with two minutes on the clock. Joe Harris was fouled out and De Colo made two free-throws as France led 84-78 with 50 seconds to go. A foul strategy didn't work for the Americans and France smiled to the last.

After the tip-off, Fournier's jump-shot opened the scoring for France, before Mitchell scored five straight points for the USA. Both sides suffered from a low field goal percentage to tie 18-18 to enter the second quarter.

Nando De Colo scored a three-pointer and Mathias Lessort turned around to drop a shot as France led 27-22 in the beginning of the second quarter. However, Jaylen Brown delivered a three-point play before Mitchell scored four straight points as Team USA railed to a 7-0 run and took the lead at 29-27. However, Fournier and Gobert combined 16 points and France increased their advantage to 45-39 before the halftime break.

France continued its run in the second half and enlarged the gap to ten points at 53-43. However, Mitchell stood out to score nine points in three minutes to lead the Americans' 17-7 run and pull the game all level at 60-60. Mitchell added another three to gift the U.S. a 66-63 lead into the fourth quarter, only to see France's crazy performance in the last ten minutes.