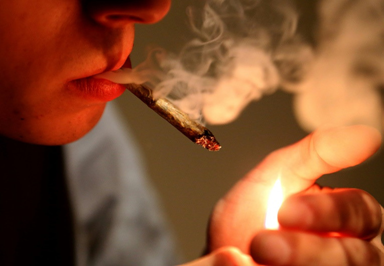 Cannabis use is on the rise in France, with around 700,000 people estimated to use the drug every day. Photo: AFP/Francois Nascimbeni

The French government announced a new approach to cannabis users on Thursday, scrapping potential prison sentences and heavy fines in favour of on-the-spot penalties for smokers in a bid to save police time.

France is one of the biggest consumers of cannabis in Europe, with around 700,000 people estimated to use the drug every day.

An EU report in 2015 on alcohol and drug use among 15- and 16-year-olds showed French teens were among Europe's biggest dope smokers.

Yet France's laws on the drug are among Europe's strictest, with those caught smoking a joint facing fines of up to 3,750 euros ($4,600) and a one-year prison sentence, although in reality most go free with a warning.

"We are going to introduce simplified fines for this offence," Interior Minister Gerard Collomb said, confirming a campaign pledge by President Emmanuel Macron.

But he was adamant that Macron would not follow the example of the Netherlands or Spain in tolerating cannabis use by adults, much less legalise it for recreational use like several US states, including California.

"There will be no decriminalisation of cannabis use," Collomb said, warning that repeat offenders or those suspected of dealing could be prosecuted.

Decriminalisation of cannabis has been regularly debated in France in recent years, but advocates are accused by opponents of being soft on crime.

During the presidential campaign, three leftist candidates proposed allowing legalising cannabis use among adults -- a call echoed by 150 left-wing politicians, teachers, lawyers, doctors and activists in the port of Marseille, which is plagued by gun violence linked to the trans-Mediterranean cannabis trade.

But police unions have expressed their opposition to any softening of the law, as had the French Observatory for Drugs and Drug Addiction, which warned in an October report that legalising the drug could lead to increased use.

"In the past, police officers and judges would spend a lot of time on procedures which ended in formal warnings being given, so it didn't serve any purpose," de Rugy told BFMTV/RMC television.

So far only one country -- Uruguay -- has completely legalised cannabis for recreational use, with Canada vowing to follow suit this year.

In a 2014 study, the left-leaning French think-tank Terra Nova touted the possible tax gains for France of legalising and regulating cannabis. It estimated the windfall at 2.0 billion euros ($2.5 billion) a year.