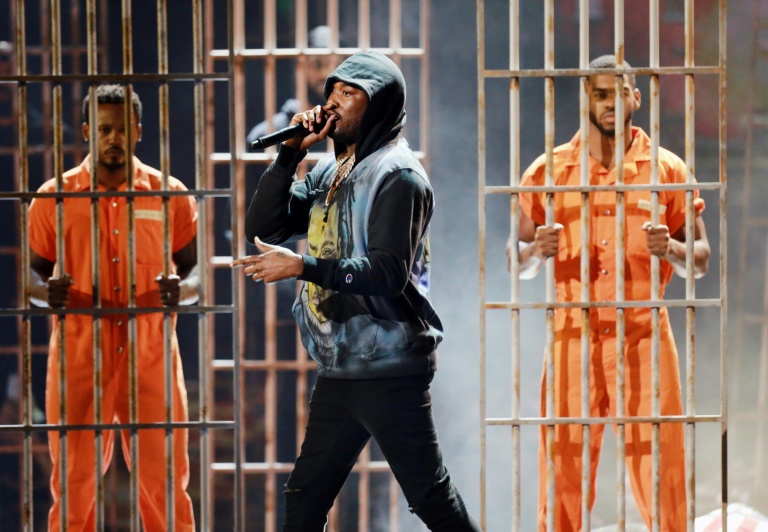 Rapper Meek Mill, free after a controversial jail sentence, returned to the stage Sunday with a vigorous attack on police brutality as he premiered a song at the BET Awards.

Mill was one of the night's most memorable performers as he debuted his song "Stay Woke." The 31-year-old rapper in April won his freedom five months after a judge jailed him over violations of probation stemming from a 2008 arrest, a decision that triggered protests charging that it was overly harsh and racially biased.

Mill performed "Stay Woke" on a set designed as a street scene in his native Philadelphia -- a neighborhood that is unkempt yet also full of life with children playing.

Police swarm onto the scene with force and a shot is heard. The song pauses and a little girl who was jumping rope is revealed to have been killed, her body then draped with an American flag.

"How can I pledge allegiance to the flag / When they killing all our sons and dads?" Mill raps. The singer Miguel contributes the chorus, which says, "Though it was designed for us to lose / Nothing, nothing, nothing's impossible / Believe it, we're still undefeated."

Nicki Minaj put on the raciest and perhaps most physically grueling performance of the night as she sported a skin-tight latex red dress, emerging with a dancing squad from a smoke-filled Chinese archway for her martial arts-themed song "Chun-Li."

She crawled while twerking on stage and spread her legs to the sky in a medley that transitioned to her song "Rich Sex" and also featured YG, 2 Chainz and Big Sean.

While many of the music awards were presented off camera, hard-living trap trio Migos won Best Group and the R&B singer and emerging feminist icon SZA took Best New Artist.

The BET Awards presented a special "humanitarian heroes" award to six people including Mamoudou Gassama, the Malian migrant in Paris who saved a child hanging off a balcony by scaling an apartment block with his bare hands.

Gassama, who smiled and saluted the crowd in Los Angeles, was nicknamed "Spiderman" and awarded French residency even though he was in the country illegally.

Other award recipients included Naomi Wadler, the 11-year-old who gained wide attention with her poised speech before the March for Our Lives in Washington urging more attention to violence against women of color, and Anthony Borges, the high school student in Parkland, Florida who took five bullets as he rescued 20 classmates during the February massacre.

Award presenter John Legend, the singer known for his left-wing activism, contrasted the winners' actions with the politics of President Donald Trump's administration including separations of migrant children from arrested parents.

"We honor these heroes and thank them for giving us hope and reminding us that everyone has an opportunity to do something extraordinary," Legend said.

"Black Panther," the superhero movie about a fictional African king that has become the third highest-grossing film ever in North America, unsurprisingly took the top prize for cinema.

Actor Jamie Foxx, the BET Awards' host, made a subtle dig at Trump as he hailed the film: "We don't need a president right now, because we've got a king."