French classrooms to be adorned with national flag, anthem's words 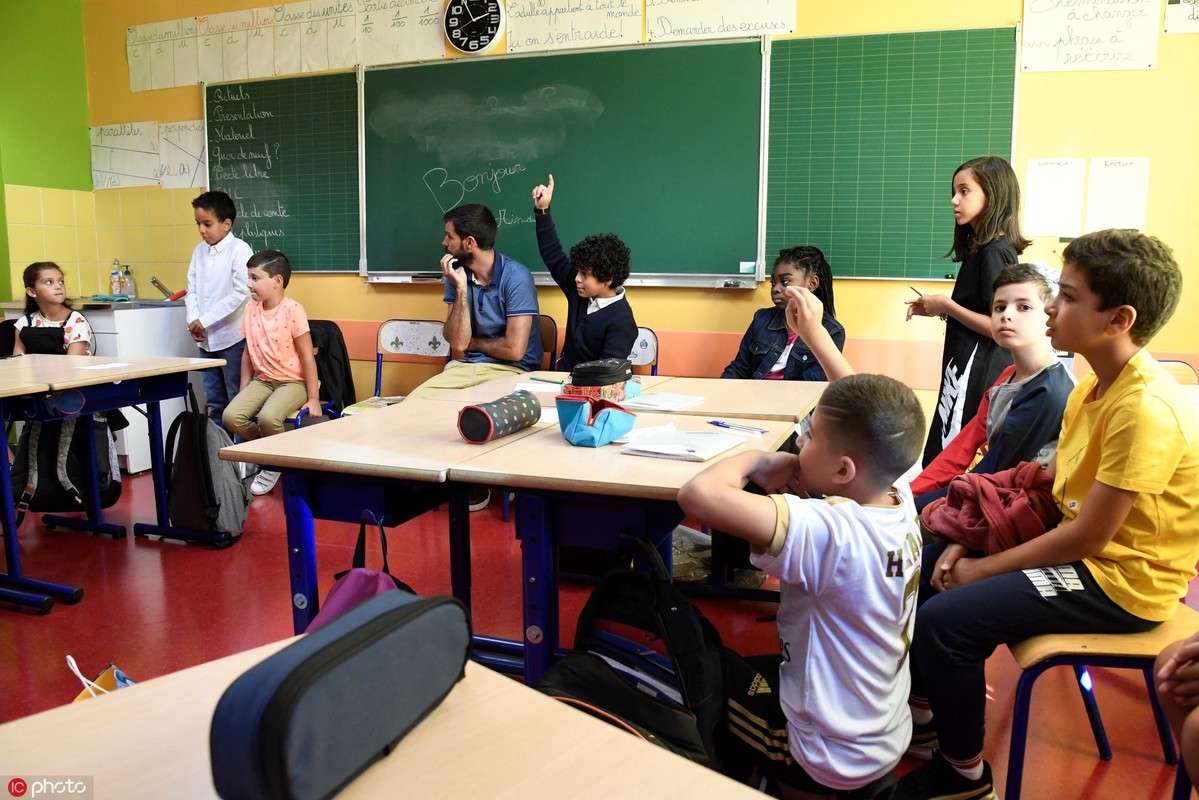 A teacher gives class to his pupils on the first day of the school year at Toussaint Louverture school in Clichy-la-Garenne, north of Paris, on Sept 2, 2019. (Photo: IC)

French students arrived in their classrooms for the start of a new school year this week to find flags and anthems adorning their learning spaces for the first time.

Parliament has made the flying of both French and European Union flags compulsory, along with the display of the words to the French national anthem, all included in a raft of education reforms.

Additionally, they must display the words of the national motto: 'Liberte, Egalite, Fraternite.

The new rules apply to all classrooms in primary and secondary schools.

The requirement for schools－both public and private－to fly the flags and display the anthem was initially suggested as an amendment to the updated education act by Eric Ciotti, an MP from the center-right opposition party Les Republicains, who said they were "an important step forward" that would "teach pupils to love France from an early age".

But the idea was controversial because some lawmakers said they feared it was overly nationalistic. In the end, the changes were approved earlier this year after lengthy debates following their endorsement by President Emmanuel Macron's centrist government.

At the time, Jean-Michel Blanquer, the nation's education minister, told Le Parisien newspaper: "Civic spirit must be strengthened. Everywhere in the world, knowing the symbols of your country is the most natural thing in the world."

Universities have been exempted from the flag-flying rule.

Additionally, other changes to France's education act mean children must now participate in compulsory education from the age of 3, instead of from age 6.

The school-leavers exam has also been changed, with more weight now added to coursework and less emphasis placed on final exams.

The BBC quoted Michel Larive, a lawmaker with the leftist La France Insoumise party, as saying the flying of a single flag outside each school, as happened in the past, should have been enough to show "respect for the homeland without veering towards nationalism".

Teachers too have criticized the need to fly so many flags in schools and said the idea is impractical.

However, schools do not have to invest in fabric flags, they are allowed to display illustrations of flags and posters have been selling fast. Additionally, costs associated with complying with the flag-flying rules will be met by the French education ministry.

Euronews, the France-based European pay television news network, noted that the "tricolore" flag already flies outside all public buildings in France, including schools.

It said the obligation on schools to display the French flag is aimed at reinforcing a sense of national identity among children, while the inclusion of the EU flag underlines Macron's vision of France as a pillar of the EU.

The Express newspaper noted that some of the proposed bill's more controversial elements were dropped along the way and were not approved by Parliament. These included a call for the return of school uniforms, bilingual classes, the setting up of school choirs, and a prohibition of mobile phones.