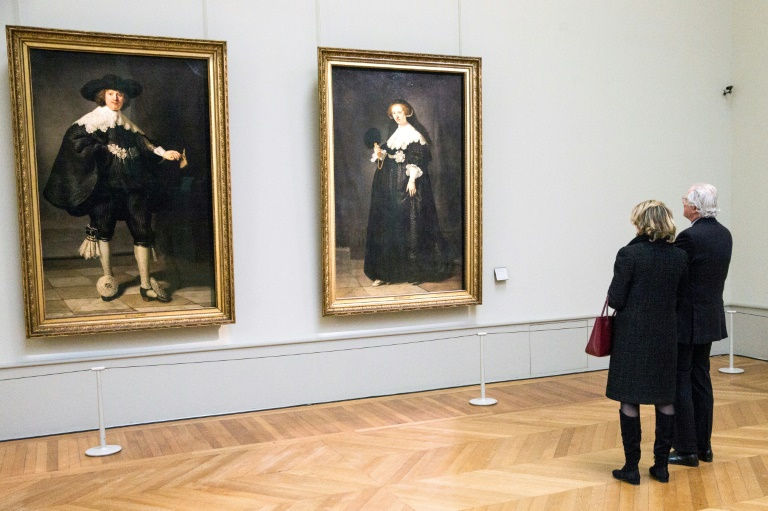 The two Rembrandt paintings, seen here at the Louvre before their restoration, are thought to represent the Dutch master's only full-length portraits of a married couple

Dutch and French art historians on Monday unveiled the surprising results of 18 months of painstaking restoration work on a pair of 17th century portraits by Dutch master Rembrandt.

The portraits of a newly married Dutch couple were jointly bought in 2015 by the Netherlands and France for 160 million euros ($174 million) from the wealthy Rothschild banking family in an unprecedented deal.

Teams from the Louvre in Paris and the Rijksmuseum in Amsterdam spent the past 18 months researching the paintings, before carefully removing at least six layers of old varnish as part of "an exciting adventure" to restore the canvases.

"They are undoubtedly completely painted by Rembrandt up to the smallest detail," Rijksmuseum general director Taco Dibbits told reporters Monday, adding they were Rembrandt's first and only full-length portraits of a married couple.

Wrangling over the portraits, captured around the time of the couple's wedding in 1634, had threatened to sour relations between France and the Netherlands.

But the accord reached to avoid a bidding war will now see the two portraits alternate between the Rijksmuseum and the Louvre.

Both dressed fashionably in black with white lace ruffles, Soolmans is depicted holding a glove in his left hand, while Coppit holds a gold chain topped by a black-feathered fan and wears a four-row pearl necklace, with a band of pearls in her hair.

It remains unknown however if the portraits were painted together and then separated, although restorers believe the canvas was split prior to painting.

Close analysis also revealed hidden details, such as doorways behind each person which Rembrandt later covered over by painting in a simple black curtain as a background.

The restoration has infused the paintings with new light, to show off the "incredible modernity" of Rembrandt's original work, said Dibbits.

The details stand out, such as the exquisite lace ruffles on Marten's shoes. It "feels as if you press them they will bounce back," he said.

Sebastien Allard, head of the Louvre's paintings department, praised what he called "an innovative" project, which after complicated negotiations "finally came to a European solution to protect cultural heritage."

The project was a first for the team of restorers, who under a "pre-nup" agreement had to collaboratively agree on every detail of the restoration, Dibbits quipped.

Discussions are still underway as to how the paintings will be framed when they go back on exhibition -- the Louvre preferring gilt frames, while the Rijksmuseum prefers plain black wood.

For Anne Lepage, a restorer with the Louvre, it proved an enriching experience as the two teams shared their techniques, as they approached the two portraits with "great respect."

"You never touch a painting without having done research, analysis and working with the archives. It's like putting together a file on a sick person before even intervening," she told AFP.

She said restorers always felt the weight of the painting's history and heritage, saying the aim was to "transmit it as close to the original as possible".

The canvases had been viewed publicly only once in the past 150 years, during a 1956 exhibition at the Rijksmuseum, as since being acquired by the Rothschilds in the late 19th century, they had been mainly hung in a bedroom.

The works will now go on show in the Rijksmuseum from March 6 in an exhibition called "High Society" and then move back to the Louvre.

They are due to alternate between the two museums every five years and then every eight years. Under the terms of the deal, they cannot be lent to any other establishment.