Do you hear the people sing? 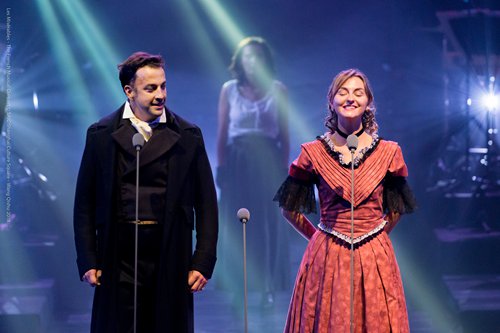 The two-hour concert, based on the classic novel Les Misérables by French poet and novelist Victor Hugo, included the French version of well-known songs from the musical such as "One Day More," "I Dreamed I Dream" and "Do You Hear the People Sing." It will be staged for 11 nights as a special performance dedicated to the 7th anniversary of Shanghai Culture Square.

The French version of Les Misérables was produced in 2017 and is the latest French version since 1991. It has been performed at 15 top stadiums in Paris and all around France before coming to Shanghai as their first overseas performance.

The musical was presented in the form of a concert, with cast dressed in 19th century costumes in the company of a stunning live orchestra and light show. Les Misérables holds a special place in the hearts of the French, be it literature or musicals. Its popularity can be seen from the scale of its auditions.

"Over 5,000 actors auditioned for the 30 roles in the musical," said artistic director Magda Hadnagy before Les Misérables opened in Shanghai. "Being able to be part of Les Misérables is a dream for each French individual," she said. The musical revisits the novel by French author Victor Hugo. Set in early 19th-century France, it tells the story of Jean Valjean, a French peasant, who decides to start his life anew after being jailed for 19 years for stealing a loaf of bread for his sister's starving child.

Along the way, Jean Valjean is relentlessly tracked down by an inspector named Javert and swept into a revolutionary period in France, where a group of young idealists make their last stand at a street barricade.

The musical premiered in Paris in 1980 with music by Claude-Michel Schönberg and original French-language lyrics by Alain Boublil and Jean-Marc Natel. Subsequently, numerous tours and international and regional productions have been staged.

The English-language version opened in London in 1985 by the Royal Shakespeare Company followed by a Broadway production between 1987 and 2003 with 12 Tony Awards nomination and eight awards.

The French concert version has been long awaited. Producer Philippe Barreau said the idea of producing a French version in the form of a concert was conceived back in 1991, when the last French version was staged.

"The English kind of borrowed our script. Through this concert we would like to let the world know Les Misérables is a French work," said Barreau.

Fei Yuanhong, vice-general manger of SAIC·Shanghai Cultural Square, believes that the French musical version of Les Misérables serves as a milestone that kicks off an age for Western musical productions to enter Shanghai like never before.

In 2002, the English version of Les Misérables was staged at Shanghai Grand Theatre, launching an era of musicals; more than a dozen a year, according to Fei. Among them, French musicals often win over local audiences. From Notre-Dame de Paris, Roméo et Juliette to Mozart-L'opera Rock, French musicals tug at the heartstrings of Chinese audiences.